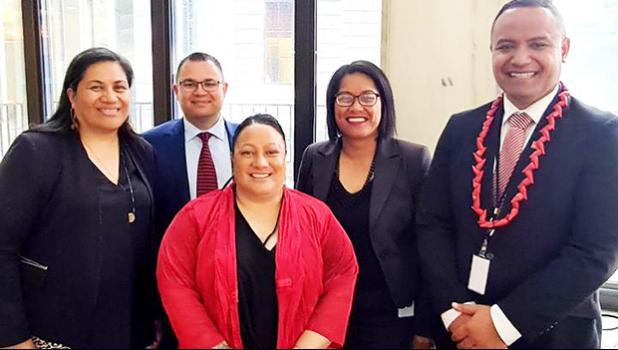 Auckland, NEW ZEALAND — There are four new confirmed Pasifika MPs in New Zealand's Labour Party — which has the largest Pacific caucus in the country's political history.

The first Pasifika person to win the Ōtaki seat was Terisa Ngobi, (of Samoan and Scottish descent), who was born and raised in Levin and married to Henry Ngobi from Uganda.

The couple has three boys.

"My kids are my big why as to why I decided to get into politics. Just making sure that they're going to be at the same level playing field as everybody else," she said.

Prior to Ngobi's win, the Ōtaki electorate was a National Party stronghold, with Nathan Guy holding the seat for 12 years .

"It warms my heart to win this seat because this area means a lot to me, and to be the first Pasifika person shows that perspectives are shifting here in Ōtaki.

"For the people to select quite a diverse person and to trust me to take their voice forward is heart-warming.

"I, like my colleagues, all have that same drive to make Aotearoa the best place to live. There's also a special place in my heart for Pacific people, what it means for us? And how can we help to contribute to make sure Pacific people are living their best lives," Ngobi shared.

In South Auckland, winning the newly created electorate seat of Takanini is Dr Anae Neru Leavasa, who is of Samoan descent.

Born and raised in Māngere, Leavasa said he wanted to advocate for social issues beyond the clinic walls.

"During the last 12 years as a doctor, I came to realise that there was only so much I could do in terms of health outcomes for our people.

"In the last four years, I became more interested in politics, hence why I ran last year for the local board and was successful, and then took it a step further to become Takanini's first MP," he shared.

Health and social policies are where Leavasa's interests lie, given his work experience, which includes a fitness-based Christian healthcare service called VO2 Healthcare in Māngere; a virtual health service called The Waiting Room; and a team doctor for sports' clubs such as the Blues, Manu Sāmoa and Papatoetoe Wildcats.

"Social policies are important to me because those are the policies that underpin health.

"I've been in Māngere for over 30 years and I've seen all the social issues such as poverty and poor housing, how that all influences your health outcomes," he said.

Reflecting on his first week in parliament following Labour's landslide win on 17 October, he said the focus of the induction was on culture.

"The culture of parliament is important; making sure we as MPs do our job properly, but also making sure we have good relationships with other parliamentary staff, and that we look after our constituents well.

"I've enjoyed meeting the diverse bunch of MPs for Labour.

He said it had been surreal to think he would be working alongside people like Aupito William Sio, who had been a strong steward in South Auckland for years.

"We are very fortunate to have senior MPs who are of Pacific descent, who we can relate to and can assist us new Pasifika MPs with how things work in the Beehive," Leavasa said.

Ngobi described the parliamentary building as like "Hogwarts" referring to its large size and the number of corridors and doors there.

"It's like a maze, trying to navigate the Beehive was the tricky part of the whole induction. You could easily get lost in there," she laughed.

Barbara Edmonds felt the opposite to Ngobi, having worked in the government sector for over 10 years, she was very familiar with the parliament building.

"It took my breath away for a moment walking into the debating chambers because the only times I've been in there was as a government official, so to walk in as an MP, it was a very proud moment for me," she said.

Edmonds is a specialist tax lawyer whose public service career has included secondments to the offices of National ministers Judith Collins and Michael Woodhouse and Labour's Stuart Nash.

"Having worked under two different governments, I saw the diversity change as soon as Labour led. I believe Labour is a true reflection of New Zealand."

Edmonds said the new MPs were highly skilled, highly connected to their communities and they combined as a big multicultural group.

"We have Dr Ayesha Verrall whose mother is from the Maldives. We have Vanushi Walters from North Harbour who's our first Sri Lankan MP. We have Naisi Chen who she describes as Labour's millennial and is one of our Asian MPs and then we have Ibrahim Omer who is an African refugee."

Adding to the diversity is MP for Palmerston North Tangi Utikere, who is of Cook Islands' heritage.

Utikere has been a member of the Labour Party for more than 20 years and said it was his late uncle who took him to his first Labour meeting.

"It was at a local school hall and from that day I was hooked. The values that the party has around inclusion, accessibility, social justice, equal opportunities really sat well with me.

"I wanted to run for MP because it's always been around representation for the city. This is where I was born, raised in, educated, where my family settled, and so it was about providing an opportunity to go to the electorate with someone saying, look! I'm a local, I have a strong local voice for this city," he said.

Utikere said his most memorable and personal political moment was when he went to Washington DC as an 18-year-old.

"It was a Congressional Youth Leadership gathering and I remember just being part of a group of young people from across the globe interested in leadership, interested in politics, passionate about making a difference in their local community.

"The memory is more than 20 years old, but it stands out for me because to this day it still rings true; I am into politics, serving my community and leadership," he said.

"I have done prison discipline hearings in prisons around Palmerston North and just before the election, I was appointed a commissioner to the criminal cases review commission, so justice is really important to me as well as fair processes."

Potential new Labour List MP Lemauga Lydia Sosene from Auckland is waiting for the special votes, including overseas votes, to be counted when her fate will be announced on 6 November.