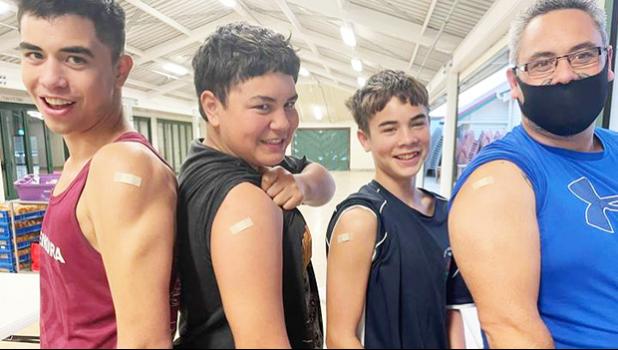 The latest figures from the Ministry of Health show 15 percent of Pasifika 12-to-19 year olds are fully vaccinated, compared with eight percent of Māori teenagers and 10-percent of all other teenagers.

In the 20-34 age group, Pacific people also lead with 27 percent fully vaccinated, ahead of 20 percent of the general population.

The ethnic breakdown for all vaccinated people in New Zealand shows 39 percent of Pacific people are fully vaccinated, compared with 28-percent of Māori, and 45-percent of other groups.

The chair of the Pasifika GP Network, Dr Api Talemaitoga, acknowledges the success of Pacific communities' organizing their own local vaccination events — with families being vaccinated together.

"I was at the Samoan vaccination event over the weekend, and you see the cars coming up, mum and dad and two or three kids over 12 sitting in the back getting vaccinated as well.

"We see the delta variant affecting younger people and because it's easier to spread and has a higher viral load and people get sicker, it's really important to get vaccinated.

"We are a young population compared to the general population and we are a socially-connected and if we want to get back to mixing with our friends, getting to a cafe, going to bars and we'll be safer by getting vaccinated."

The Director of Pacific Health, Gerardine Clifford-Lidstone, says it's important people feel they have options when it comes to vaccine-related issues.

"We need to make it easier for them to come for their second dose. Making it easy means there's lots of options for people to go to. If they want to go through a booking centre, if they want to walk in at their local shopping centre they can. That those second doses can pick up if there are plenty of options for people and we make it easy for them.

"We are pleased with the incremental progress that we are making to vaccinate our communities and one of the positive things is the ownership that ethnic Pacific communities are taking for themselves.

"Our over 64s are also doing well, above that 80-percent mark. Extremely positive. I encourage those under 50 to do the same."

Dr Maryann Heather, of the Pasifika Medical Association, says while those numbers are a cause for celebration, every effort must be made to maintain the current trend of young Pacific people getting vaccinated.

"It is quite exciting because this is basically the age group that we have been trying to convince to get vaccinated. There have been issues about whether they were able to come in and get it. Parents may not be consenting and there's the misinformation."

Dr Heather says the latest youth figures mirror the situation she's seeing on the front-line, but warns there's more work to be done.

"It's still people being suspicious about the vaccination and how they think it would be like. Some people we speak to say they are not too sure. They might bring their parents in to get theirs done, but for them it's like 'oh I'm just going to watch and wait, I'm going to wait and see."

A survey by a Pacific consultancy group interviewed more than 800 youth across New Zealand getting the Covid-19 vaccine.

It suggests almost one in three (30 percent) young Pasifika are still undecided about vaccination, while one in five (19 percent) are outright reluctant to get one.

The head of one the largest Samoan churches in New Zealand says Pacific community and health leaders can do more to encourage their young people in the fight against Covid-19.

Rev. Victor Pouesi of the EFKS in the South Auckland suburb of Māngere says the rate of vaccination among Pacific youth, while higher than other ethnic groups, can still improve.

He believes the message is not reaching people and this has been exacerbated by the lockdown restrictions.

Mr Pouesi says with churches and community gatherings not allowed, the only source of information is the Samoan radio station and social media.

He says under the current lockdown restrictions, churches and other centres where Pasifika gather are closed and they are not able to get the messages that they would otherwise have access to.

He also says young Pasifika are not looking to the Covid info sites to get the message.

Organizers of all of last weekend's Pacific vaccination rollout across Aotearoa New Zealand have set their sights on helping other communities do the same.

In Christchurch, they held vaccination days throughout this month targeting different Pacific groups, making the vaccine more accessible to them.

Maliaga Erick, of the Niue community, says they stand ready to assist their Pasifika whānau from Kiribati, Tuvalu and Tokelau.

She says these smaller communities do not have the resources to hold their own events.

"We are going to have a meeting because there also other churches who asked to combine. For Tuvalu and Tokelau, their resources are small in terms of medical staff and their population is small. Let's do this right. Tao e umu ke moho.

"We're done with this umu and we're happy and it was not only for the vaccine rollout but there were other benefits including families reuniting and others making new friends.

"Last weekend's event was a celebration but also an inspiration for our young people to come through and get vaccinated."

Nearly 1,000 people turned up for the Niue rollout at Māngere.

"We were at 63 percent but over a two-week period we were able to increase that to over 70 percent. And if we look at some of the Pacific page cohorts, the 65 year olds and over they are pass 85 percent and 50-64 is at 84 percent for the first dose."