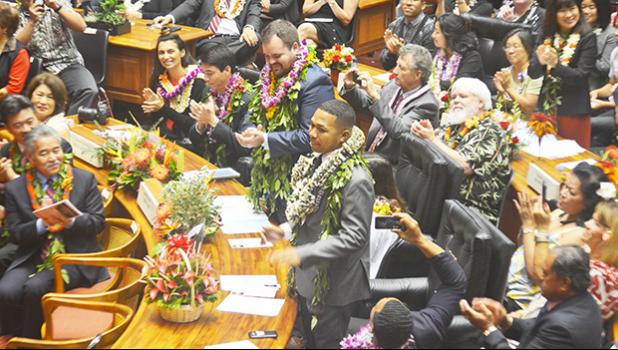 When the Hawai’i Legislature convened last week for its new session, the youngest lawmaker among members is a person of Samoan ancestry from American Samoa in the Hawai’i state House of Representatives, serving his first term in office.

“Being the youngest lawmaker... at age 23, has definitely been a blessing because I feel that my community has made a commitment to investing in our young leaders and it also shows that our elders have confidence in the success of our future generations,” Gates said yesterday from Honolulu responding to Samoa News questions.

According to family members, Gates is the grandson of Leaosa Asuega and Faigaelo Moananu and the great grandson of High Chief Solosolo Mauga Asuega and Samitioata Moemoe Asuega — all from Pago Pago  “He brings new ideas and a bright future for the people of West Oahu and his district,” said a family member in an email message to Samoa News.

Some family members, brother Benjiman Asuega Gates, Anita Asuega of California and Meafou Asuega Sausi of Hawai’i, attended the opening of the Hawai’i Legislature on Jan. 18 that included traditional Hawaiian song and dance.

“Advantages as a young member of the House, I feel that it is my responsibility to listen more than I speak,” he said. “I find that being a young member, my distinguished colleagues are more open to share their knowledge and experiences with me.”

Asked for reaction of being a young lawmaker of Samoan ancestry, Gates points out that he was born in Wai’ane, where there is a large Samoan/ Polynesian population.

“The community... has been very supportive of my campaign, and has helped spread the word to their friends, family, and co-workers,” said Gates, who noted that there are currently two other lawmakers of Samoan ancestry in the Hawai’i Legislature including himself “and I am glad to be part of that group.” The other two are Hawai’i state Rep. Andria Tupola and Hawai’i state Sen. Mike Gabbard.

US Rep. Tulsi Gabbard “has been a strong influence for me. Not only because she is of Samoan decent, but also because she currently holds the record for being the youngest State Representative ever elected in the history of the State of Hawai’I at the age of 21.”

Gabbard, who was born in Leloaloa, American Samoa, was elected to the Hawai’i state House in 2002. Hawai’i Sen. Gabbard is related to Congresswoman Tulsie Gabbard — he’s her father.

“I look forward to visiting Samoa in the near future to help strengthen and build relationships between Hawai’i and Samoa,” said Gates, who served as an intern for Congresswoman Gabbard and as a member of the Congresswoman’s Youth Leadership Council. “I also look forward to learning more about my heritage and ancestors of Samoa.”

According to the Hawai’i Legislature website, Gates is vice chair of the House Committee on Ocean, Marine Resources, & Hawaiian Affairs; and a member of other committees - Agriculture; Finance; and Public Safety. Since the new session began, Gates has helped introduced 11 bills.