One of last traditional navigators dies 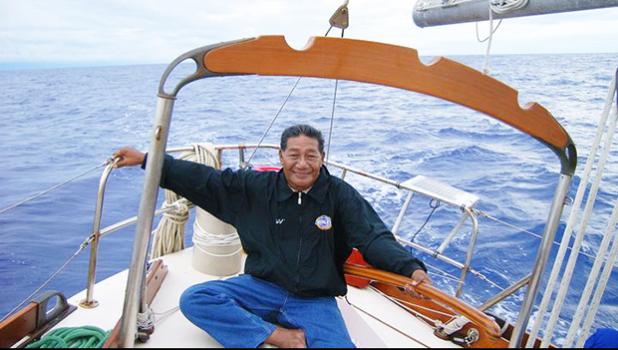 One of the last of a dwindling breed of traditional navigators has died in Majuro, but not before passing many of his skills onto a younger generation of Marshall Islands navigators and to international researchers.

Captain Korent Joel, 68, was a skilled navigator who blended both traditional and modern skills that had him captaining numerous vessels for the Marshall Islands government while also working to share traditional wave navigation techniques to younger generation Marshall Islanders over many decades. Mr Joel was featured in the New York Times and other publications in recent years.

He was recognised for his determination to ensure that those skills did not die with him. Until his recent death, Mr Joel was one of only a handful of living Marshall Islanders who were skilled in traditional navigation. Marshall Islanders have long been recognised as skilled navigators, travelling long distances on the open ocean between low-lying atolls by using wave motion and stars as their guide.

Mr Joel stood out for his work in bringing together other navigators to share knowledge so it could be documented for future generations.

This led him to a long-term partnership with Waan Aelon in Majel (Canoes of the Marshall Islands) Director Alson Kelen and researcher Joseph Genz of the University of Hawaii. Mr Kelen's program has, for the past two decades, trained hundreds of young Marshall Islanders to build outrigger canoes and sail them to keep the art form alive.

Despite ill health over the past several years, Mr Joel joined in various voyages to teach wave navigation techniques to Mr Kelen, and so Mr Genz and other international researchers could document the knowledge.

Connections in the late 1980s and early 1990s between Majuro-based boat builder Dennis Alessio and Mr Kelen, and Ben Finney of the Polynesian Voyaging Society in Hawaii initiated discussions about documenting navigation skills. "This is when Captain Korent came into the picture," said Mr Kelen. "He wanted to write a textbook so the information would be documented - both as a training tool for future navigators and as an academic resource for classrooms so students could learn about their history."

Mr Genz was Mr Finney's student, and Mr Finney recommended him to work with Mr Joel and the Majuro canoe programme on the documentation project. Mr Kelen noted that Mr Genz expects to publish a biography on Mr Joel later this year.

"Captain Korent came to us when he heard about Ben Finney," said Mr Kelen. "He wanted to be sure navigational knowledge would continue."

"Captain Korent wanted to get a textbook completed," he said. "Joe's work has gotten us close, but there is still more needed from our other navigators. We're still moving forward with Captain Korent's dream to have a document in place."

Because Mr Joel was also a licensed ship captain, it gave him a foot in both worlds of navigation and the ability to communicate his knowledge to outsiders as well as Marshallese.

Stories about his navigation skills abound.

On one trip between Kwajalein and Ujae atolls, on a small yacht without modern navigation aids, they were hit by high winds, recalled Mr Kelen. While Mr Joel was sleeping, the crew on the boat turned on the engine to help with steering, but the engine wasn't strong enough to help. As they started tacking the sailboat, Mr Korent emerged from below desk to ask, "what are you guys doing?

"You're heading way north, turn back this way" - pointing to the port side. It was a pitch black night, no stars were visible and it was raining heavily. The crew was amazed when a few hours later, as dawn broke, Ujae appeared in front of them.

Referring to Mr Genz's documentation of Mr Joel's navigation skill, Mr Kelen said: "Joe always carried a GPS on these trips, but we never once needed it."

They made trips between numerous atolls around the Marshall Islands to document navigation in differing wave and current conditions, too.

"We had a buoy with sensors that we dropped into the ocean to collect data that we would use to compare with what Captain Korent told us during the trips," Mr Kelen said. On one voyage, Mr Korent commented to the rest of the crew, "we've got some swells coming in from New Zealand." The crew was skeptical. But when they reviewed data from the wave buoy it confirmed Mr Korent's earlier observation: waves were coming from New Zealand.

Captain Korent could navigate by the stars. But if clouds blocked the stars, he was comfortable navigating by wave swells. "The swells never change," he said, making the point that understanding wave motion is the foundation of Marshallese navigation. "Wave piloting" was his specialty, said Mr Kelen.

Mr Joel spoke the "language of the water" - terms that few Marshall Islanders understand in today's modern world. He was able to absorb knowledge from other navigators and explain it to others who were less familiar with the language.

As recently as 2014, despite Mr Joel's increasingly poor health, he still took part in voyages, travelling on a fisheries department boat while keeping in touch by radio with an outrigger canoe manned by a team from the local canoe program, including Mr Kelen, and travelling without the use of modern navigation equipment.

At one point during a trip from Majuro to Aur, a 140km journey, the two vessels were separated and couldn't see each other. The canoe team radioed for Mr Joel's advice on their direction.

His reply: "Feel it." It was cloudy, so the sailors couldn't see the stars. Mr Joel's point, said Mr Kelen, was the sailors should use the swell to know their location.

Following Mr Joel's instruction to feel the swells, the team arrived at the pass to enter Aur Atoll a few hours later, even though the canoe's navigator (Mr Kelen) had never been there before.

Mr Kelen's observation about the state of navigation in today's Marshall Islands: "It's amazing how much we lost and how much interest we've lost in it. I hope what Captain Korent started with other navigators won't stop now. This is the blueprint not just for navigation, but for life in the Marshall Islands."

Navigators know how to plant seeds, build canoes, organise the community, protect the reef, and navigate by the stars and waves, he said.

It's the path for sustainable living, and a way to stimulate young Marshall Islanders to be interested in becoming marine biologists, oceanographers and other marine-related skills to help the country prosper in the future, said Mr Kelen.

In addition to his traditional skills, Mr Joel used his western skills to captain vessels for the Ministry of Transportation, National Police Sea Patrol and the Ministry of Health as well as private vessels.

He is survived by his wife Jerilañ, and 13 children. Funeral services are currently ongoing in Majuro, the Marshall Islands capital.