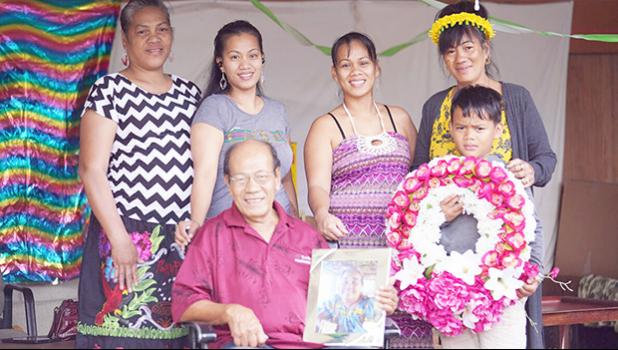 Samoans are not the only stranded Pacific Islanders
By
Anita Hofschneider, Honolulu Civil Beat

Honolulu, HAWAII — Rodrigo Mauricio knew that his wife Mary was going to die. For a decade, he had watched her diabetes worsen and her kidneys weaken. He had ushered in 2020 with her in the hospital. He had read the pamphlets from Island Hospice about what to expect when the end came.

On the day Mary died, April 1 of this year, the sun was pressing against heavy cloud cover in Palolo Valley. Mary was at home, in a bed the family had set up in the living room of the house she and Rodrigo had bought three decades before when they moved to Honolulu from Pohnpei.

All twelve of their children were present: 10 in person, two from Pohnpei via Facebook video. The family sang church songs to Mary, coaxed her to eat salted lemons, wept as her breathing slowed.

Rodrigo watched as time stretched between each of her breaths. Inhale, exhale. He waited for another breath that never came. Even though he knew what was happening, he felt overwhelmed with shock.

Somewhere in his immense grief, he also felt relief. Now, finally, the woman he loved would no longer be in pain.

But there was a new challenge to contend with: The world was descending into a fast-moving pandemic. If it hadn’t been for COVID-19, the family’s home would have been inundated with visitors praying the rosary. Mary’s body would have been sent to a Honolulu mortuary and then flown to Pohnpei, so she could be buried in her ancestral homeland alongside her mother and father.

Instead, seven months after her death, Mary’s body remains at a Honolulu mortuary. And the Mauricios remain in limbo, praying that they can soon accompany her home.

In her Pohnpeian community, Mary was an esteemed matriarch: the leader and last of her generation in a clan consisting of hundreds of members. Until she is buried, her clan cannot bestow her title upon another, Rodrigo explains.

He believes she is trapped in lahngepwek, heaven on earth, unable to ascend to lahngapap, heaven in the sky.

“I worry every day because she is still not at rest,” he says.

Pacific Islanders in Hawaii have been hit harder by COVID-19 than any other group.