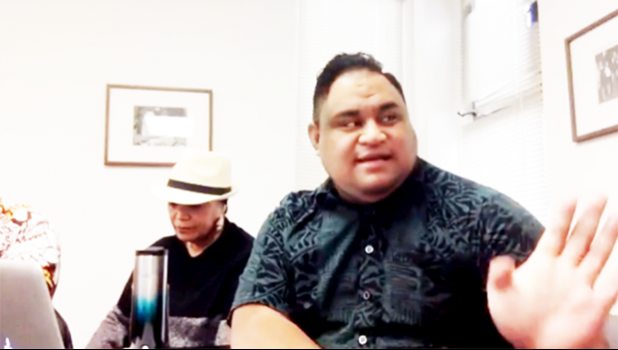 San Mateo, CALIFORNIA — Tauanu’u Ve’e, of the Regional Pacific Islander Task Force, stressed that it’s important for their communities that people specify their island of origin when filling out the 2020 census questionnaire.

Despite mounting worries over the CORVID-19 pandemic, more than a dozen Pacific Islander activists and media representatives gathered in San Mateo March 14 to anchor an online conference about the 2020 census and their collective stake in an accurate count.

They were joined online and over the airwaves by almost a hundred more people -- various voices from the “Coconut Wireless” – who watched, listened and added their own perspectives. The online conference was hosted by Ethnic Media Services with the support of the California Complete Count Office 2020 census.

“They [government officials] need to see us. We pay our taxes, we pay our dues,” said Nackie Moli, who runs the podcast Poly by Design. Identifying herself as a “proud Samoan woman,” she said she was excited to promote the census in her work with Island Block Radio, heard, she said, from Alaska to Mexico. “We all need to be counted.”

Census data permeates U.S. society. According to one expert, it directs $1.5 trillion in annual federal spending (https://tinyurl.com/Census-drivenSpending) on health care, education and development, and more, in hundreds of government programs and projects.

Addressing the role of census data in supporting education, Manuafou Liaiga Anoa’i, of the Jefferson School District Board of Trustees in San Mateo, said: “Empowering others -- that’s census. Education in a classroom? That has to be funded. We have to continue to give our future generations more resources.

“We are an invisible community, but we don’t have that poverty mind-set. We continue to be warriors.”

According to the 2010 Census, the total U.S. Native Hawaiian and Pacific Islander population was 1.2 million, more than half living either in Hawaii or California. By 2018, that number had grown to 1.4 million, still largely in Hawaii and California, according to estimates presented by Alisi Tulua, of One East Palo Alto and OCPICA.