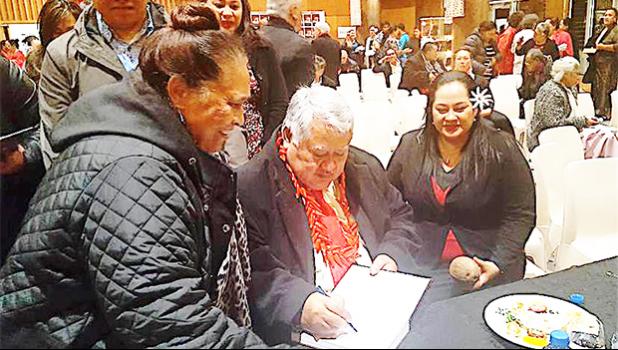 On Thursday, Aug. 10, 2017, Prime Minister, Susuga Tuilaepa Sailele Malielegaoi launched his book, “Palemia” — written by Dr. Peter Swain, as narrated by the PM — in New Zealand during a well-attended event at Samoa House in Auckland, NZ.

The prime minister spoke during the event offering a brief background of Samoa’s political past, noting that, “Samoa is now the most stable democracy in our small corner of the vast Pacific Ocean,” and that was one of the reasons Dr. Swain was interested in writing his memoirs.

Tuilaepa commented that his party, the HRPP, is “branded as the ‘Party of Doers’ and Party of the People. Party politics have certainly put to rest the born to rule myth of the past.”

Tuilaepa paid “special tribute to Dr. Peter Swain for his endless energy in putting together this project despite the challenges posed.”

SAMOA OPERA HOUSE ON DRAWING BOARD

If all goes according to plan, Samoa will have its own Opera House at the Leifiifi State School Compound, some time next year.

So revealed the Minister of Education, Loau Keneti Sio, who said construction of the multi-dollar centre would start before the end of the year.

According to RNZ, an opera house will be one of the facilities included in a cultural and art centre, to be built in Samoa with funds from a municipal government in China.

It said this is sure to delight opera fans as well as provide a fitting performance venue for Samoan opera singers such as Pene and Amitai Pati, and their baritone cousin Moses Mackay, Isabella Meleane Moore, Jonathan Lemalu and Marlena Devoe to name a few.

Loau revealed that the old headquarters of the Ministry of Education, Sports and Culture at the state school compound in Leifiifi, a few minutes inland of Apia, has been demolished to make way for the center.

The construction of theaters, opera houses, and other cultural facilities by China as gifts to foreign countries is a part of China's foreign aid program.

In a white paper published by China in 2009 on its aid projects in the area of civil construction, the building of cultural facilities is one of the types identified among a total of 2,025 projects stated as built by a Chinese grant or no-interest loan to the recipient country.

The project is a gift from the Huizhou Municipal Government in the Guangdong Province through a city sisterhood agreement signed in 2015.

During the signing of the Memorandums of Understanding, the Chinese undertook to provide assistance in three areas.

Firstly, in terms of well-being projects, Huizhou offered assistance to Samoa in the construction of a multi-functional park as the symbol of China-Samoa friendship, as well as a culture and art center which would comprehensively serve as a library, opera house, artistic exhibition hall and recreational zone.

Secondly, in regards to educational cooperation, Huizhou would provide and install an electronic teaching platform for each of the 23 public colleges in Samoa — this project has already started and set up three computer laboratories for selected schools.

Huizhou would also assist Samoa in establishing scholarships to the value of $US81,700 a year for three consecutive years.

The Huizhou would present financial awards to 30 students with excellent academic performances and another 30 students from families with financial disadvantages.

A future exchange visit by students of Huizhou Hualuogeng Secondary School and Samoa College was also planned as part of the sister- school relationship.

Thirdly, regarding health cooperation, Huizhou would provide medical equipment to the Ministry of Health of Samoa through a sister-hospital relationship with Tupua Tamasese Meaole Hospital of Samoa.

Community groups in Guam are calling for peace amid the bellicose rhetoric of the United States and North Korea.

Peace rallies are being held on the streets of Guam's capital Hagåtña.

“So we are going to be holding signs and just speaking about how much we want peace in our homelands, how much the people of Guam should be allowed to lead their lives.

“They call Guam where America's day begins and so what I would like to say is that Guam's day shouldn't end just so America's day can begin."

“Number two: we definitely have to think about the role of the hyper militarization of the world in which diplomacy starts falling apart in favor of pure realist power politics.

“Number three: if Guam is hit, any nuclear attack could be the catalyst for World War III.