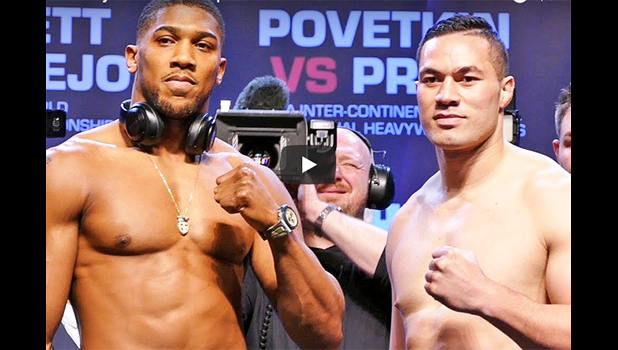 By
James Lloyd, for Samoa Observer

Cardiff, WALES — Lupesoliai La’auliolemalietoa Joseph Parker has sent out his final rallying cry as he and Anthony Joshua faced off for the final time ahead of tomorrow’s hugely anticipated heavyweight unification bout at Cardiff’s Principality Stadium.

Lupesoliai, born to Samoan parents Dempsey and Sala, arrived on stage to a traditional Siva Tua dance and haka in front of a packed out Motorpoint Arena, Cardiff, at Friday’s weigh-in. (See video below.)

Parker weighed in at 16st 12lbs 7oz, with rival Joshua his lightest in four years at 17st 4lbs 2oz.

And the 26-year-old says he’s “ready for war” when the two giants go toe-to-toe in the Welsh capital with the WBO, IBF, WBA and IBO heavyweight titles on the line.

He said: “I’m ready for anything, I’m here for a good fight and I’m here for war. You’re going to have to give me everything to beat me.

“The first few rounds, we can either test each other out or go for the kill. We’ll see who executes the game plan well and to the best ability.