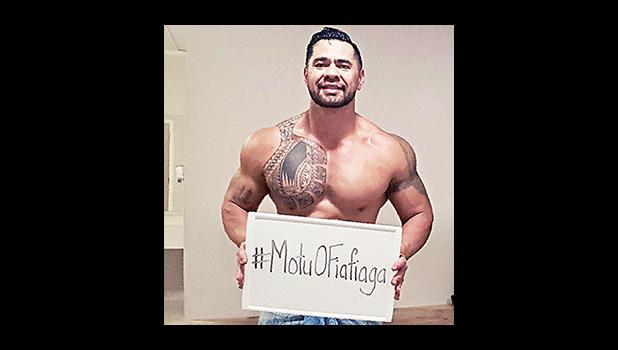 Recently, the Maori Television in New Zealand hosted a show — Game of Bros — that had two Samoan female comedians Pani and Pani go in search for their Mr. Lavalava. One of the warriors they found eligible and right for the competition and challenge was Paul Ah Kuoi.

Paul Ah Kuoi was not sure whether to join the competition or not because he felt that the show would be more for younger guys but later he remembered his reasons of how he became who he is today, and they’re related to what the World Health Organization says is a health crisis in the Pacific region —  “Non Communicable Diseases”.

In 2012, NCD’s sometimes also known as “lifestyle diseases” because they are brought about by the way you live — are the reason for 80% of early death in the Pacific, according to WHO, which pointed to American Samoa having a diabetes prevalence rate of 29.6% and an obesity rate of 74.6%, while Samoa followed with 21% and 57% respectively.

WHO said both Samoa and American Samoa exceed the average for Pacific island countries. It also noted that the main four NCD risk factors are tobacco use, physical inactivity, overweight and obesity.

Growing up in Alafua, Paul Ah Kuoi had always been a big kid. “I had always been big. Even in High School. But I made excuses. When I had photos taken I would say, ‘Oh, that was just taken at a bad angle, that’s why I look so big’.

“My doctor then sat me down and told me I was next in line,” Ah Kuoi said.

He told Samoa News, “I moved to New Zealand in 2002 from Samoa, and my first impression of our Samoan people and the way we live was that we were a burden on the health system.”

Ah Kuoi said he then started a food diary where he would write down every single thing he put in his mouth. During that time he was part of a well-known band called the “RSA Band” that was formed in 1995 in Samoa.

He weighed over 350 pounds and being the lead singer, after shows and rehearsals they would have late night meals and alcohol. “These were part of the lifestyle. I realized, after that simple task, I knew exactly what I was doing to myself.”

Ah Kuoi said, he felt so uncomfortable and embarrassed with the way he looked especially wearing oversized clothing when he would perform with the band. He also did not want to go through what his family went through — to be diagnosed with diabetes. He knew he needed to make a change; although sometimes during his workouts it would get so hard he would want to give up especially when it came to food.

“In the earliest stages I needed to stop myself from giving in to temptation, which is hard to do when you have a family who don’t necessarily need to go on the same strict diet as you.”

It wasn’t easy at the start, Ah Kuoi said, “But each time I tripped — I’d gained a lesson and a valuable experience in return, and I would develop an alternative approach if ever I were in that particular situation again.

“You put your body through something it’s not used to, and refraining from food I loved but wasn’t good for me. I was putting myself out of my comfort zone and all that I had accustomed to,” he told Samoa News.

Being Samoan you have to quickly develop several strategies to dodge, sidestep and overcome the many, many ongoing family gatherings and events that might throw people off track.

The key step for Ah Kuoi was to make sure his family was onboard with what he wanted to achieve, and that he had their full support. As a result, his wife would cook the kid’s meals and they would eat it by the time he would get home and anything left over was put away out of sight. His food, which was to be cooked separately (grilled, baked, BBQ’d, steamed – all except frying really), was what he came home to.

He says, he would not have been successful without his family’s support system firmly in place.

“People still come up to me and ask how my diet is going, and I say What diet? It’s basically how I live and eat now, new and solidly formed habits that have just become the norm.”

Now at the age 40 — free from being obese and a diabetic — Ah Kuoi is “half” the man he used to be, but with twice the confidence and he continues to perform comfortably in a band in New Zealand — called the Fiafia Band.

And, early this year, in April, he walked on the field wearing just a lavalava, to participate as one of the 12 eligible warriors in the Game of Bros, which is a television show based on a competition composed of daring battles and various traditional tasks, flexing your muscles, including washboard abs — all to promote the fight against obesity. The 2016 television show episodes started in early April and finished in late June on Maori Television.

“After saying no 3 times to people associated with the show that recommended me to audition for it, I thought ok, I’m going to do it to represent older Pacific island men, who seemed to have let go of their health and fitness from 30s and up,” Ah Kuoi told Samoa News.

And so he did join. Ah Kuoi did not win the competition but his fight touched the people who have seen the show.

“He may have been eliminated, but Paul stole the show with his inspirational exit speech. Aunty Henga one of the judges loved his fight against obesity, among Pacific islands,” said Madeleine, a fan of the show.

“My 3 key reasons for doing Game of Bros was: to create more awareness about diabetes; awareness about obesity; and, the one about older Pacific island men,” Ah Kuoi said.

Ah Kuoi has created a facebook page called — “Think FIT” — to continue to promote awareness about diabetes and obesity for our Polynesian people especially Samoans.

For others wanting to take inspiration from Paul’s story, he says all you have to do is start.

His wife has noticed a huge change in Paul, and the couple is very happy seeing the new lifestyle for him and especially its affect on the kids. It has brought his family together —living healthy and much stronger.

“Don't expect, or get fixated on overnight results. It will not happen without some patience, a bit of hard work, and sacrifice. It's about a lifestyle overhaul. Identify your eating habits, replace bad foods with healthier choices, and get active. Impossible is not a fact, but an opinion and only a state of mind,” he said.