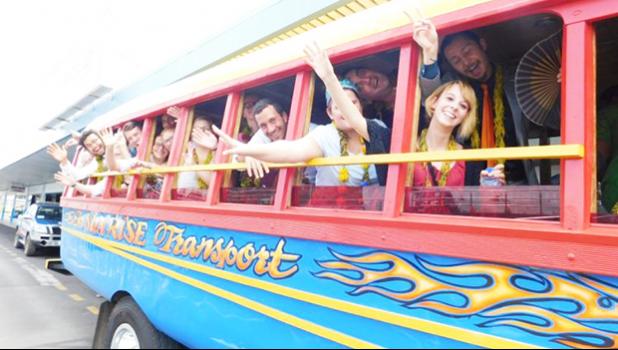 Apia, SAMOA — Peace Corps celebrates 50 years since volunteers from the United States of America first came to Samoa. According to information gathered from the US Embassy, the first Peace Corps came to Samoa in 1967 and one of the first tasks was to assist with recovery efforts in the wake of a devastating cyclone in 1966.

Peace Corps Volunteers spend two years serving in Samoa.  They often live in rural villages with Samoan families and work within the local communities.  They receive a small living allowance but are not paid a salary. They are here because they want to serve; they’re here because they want to help Samoa reach its development goals.  They dedicate two years of their lives to this end.  However, although they are here to make an impact, the Peace Corps Volunteers themselves are also profoundly impacted by their time in this beautiful country and deeply touched by the generosity of the Samoan people.

According to the US Embassy, the Peace Corps was launched in 1961 by President John F. Kennedy and his vision was to establish an organization that would promote global peace and friendship. “The mission of the Peace Corps is therefore not only to provide trained men and women to interested countries but also to promote understanding across cultures and nations. Since 1961, the Peace Corps has served in 141 countries and currently serves in over 60.  In Samoa, the first Peace Corps Volunteers worked in rural villages, leading health and hygiene projects for the Department of Health. These early Volunteers remain well known for the introduction of water-seal toilets or the “fale Pisikoa”.

The next groups to follow were civil engineers, architects, accountants, statisticians, and economic planners who served under the Public Works Department.” One early Volunteer was the architect of the long-standing Parliament building at Mulinu’u and the supporting offices of the Legislative Assembly. Volunteers also had a significant impact on infrastructure and economic development, including the design of the Faleolo International Airport terminal, various school buildings, the Eleele Fou land reclamation, numerous road projects, the ferry service, as well as the establishment of the National Provident Fund. Some took up prominent executive positions in various government departments, such as Acting Director of Public Works. The US embassy further notes that in health care, volunteers have served as researchers in the effort to control the parasitic disease filariasis and have worked at the National Hospital as nutrition educators and dietitians.

Other Volunteers have worked as small business advisers and as youth development workers. The majority of Volunteers, however, have been classroom teachers and advisers with the Ministry of Education. “They have helped build the capacity of local teachers by serving in classrooms, working directly with students and supporting the professional development of teachers. Volunteers have taught in a variety of subject areas, including business, computer studies, English, mathematics, and science. Many Samoans have been touched by the Peace Corps and are happy to share stories about their favorite Pisikoa teacher, colleague, or friend.” The Peace Corps Samoa is dedicated to their joint English Literacy project with the Ministry of Education, Sport and Culture and their partnership with the Secretariat of the Pacific Regional Environmental Program (SPREP).

They have stood with Samoa since nearly the country’s inception, and the relationship is as strong as it has ever been, says the US Embassy. Countless Samoans have adopted Peace Corps Volunteers into their families, treating them as their own, loving them and caring for them.  They have helped the Volunteers to learn about the traditions and culture of Samoa and have ensured the Volunteers experience the generosity of the Samoan spirit.  Volunteers come to Samoa to “change the world” and at the end of their two years find that the world – or in this case Samoa – has changed them.  This is what development is truly about - each of us helping the other to discover our potential and fulfill our dreams, according to US Embassy.