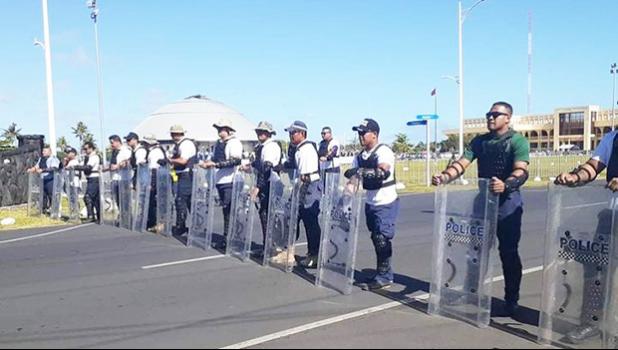 Apia, SAMOA — For the first time in the 59 years of Samoan independence, the Parliament grounds have been barricaded for today's session of the House.

The barricades went up late last night after Police put out a public notice declaring Parliament building and surrounding grounds out of bounds for all members of the public.

This follows an earlier press release from the office of the Speaker, Papali'I Ta'eu Masipa'u, banning all uninvited members of the public from attending the session this morning.

In a letter to the HRPP Monday, September 13, Papali'I said that a decision had been made not to allow an expected swearing in ceremony for them when the House convenes today.

He wrote that it was still evident from a recent letter from HRPP, as well as what was said at a Party meeting last Friday, that HRPP still has not accepted or recognized the Faatuatua I Le Atua Samoa ua Tasi government as sworn in May 24, 2021.

At a press conference on Monday afternoon opposition leader Tuilaepa Sailele Malielegaoi said that if they had not accepted the FAST government, they would not have left their offices.

"We are still within our rights to criticize the government as a party in opposition," he added.

He said all 25 elected HRPP members would be attending Parliament today along with families and members of their districts to escort their elected members to their swearing in with drums.

Eight of those elected HRPP members have since lost their seats in the electoral petition process.

This prompted Speaker Papali'i to issue the blanket ban on the public except all government heads of ministries and statutory bodies along with accredited media.

Samoa Police then moved to enforce the Speakers ban by also issuing a public notice to the same effect and erecting barricades at Tiafau, Mulinu'u.

Tuilaepa yesterday said it is likely that the Faatuatua I le Atua Samoa ua Tasi government will try and push the expected national budget through at this one session as there will be no opposition.

He warned however that this will be unconstitutional as there will not be enough numbers to make up a legitimate quorum for Parliament to sit.

"When the speaker takes his seat, he cannot be counted as part of the quorum," he said.