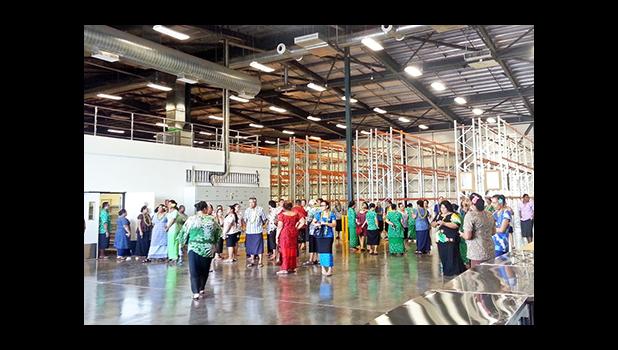 Apia, SAMOA — The Samoa Government set a milestone in Apia with the opening of Samoa’s first, state-of-the-art, pharmaceutical warehouse which was officially opened this past week by Prime Minister Tuilaepa Sailele Malielegaoi. The warehouse is located behind the offices of the Ministry of Health at Motootua, and has been a long-awaited initiative put forth by government in 2008.

During his special remarks, Tuilaepa urged government agencies not to be complacent with projects and developments. “This project was first discussed eight years ago and to get to this point today, where we are finally opening this pharmaceutical warehouse, is an important milestone for our national health services.

“I strongly urge every government agency not to be complacent with projects. Once the ball is rolling, don’t delay. Make use of whatever allocated funding is available and mobilize your staff and resources to ensure government’s development plans continue to move forward.

“This warehouse is vital for Samoa’s national health services. This purpose-built facility will allow government to buy, store and maintain better quality and larger quantities of medicine, which is important when planning ahead and ensuring we are prepared for any eventuality such as supplier delays or natural disasters.”

“This state-of-the-art facility … will also be an important store of emergency supplies throughout Samoa and the region during natural disasters. Development partners are helping the government of Samoa with three other priority buildings — renovations to the hospital at Tuasivi, a new orthotics and prosthetics workshop, which has been completed and a new primary healthcare clinic due to be completed by the end of the year.

“It is our hope that these facilities will lead to better access and to better services for families throughout Samoa. Improving the health of a country’s population will always improve a country’s economy and help secure a more successful future,” said Minister Fiarraventi-Wells.

The $12.9 million Tala complex has been built to New Zealand/Australian building standards; is fully air-conditioned; linked directly with the Fire and Emergency Services Authority; has an emergency generator; cool storage; and is climate change resilient and built to withstand extreme weather conditions here in Samoa.