As Samoa court is poised to consider legality of swearing in, Tuilaepa accused of desperate attack on rule of law 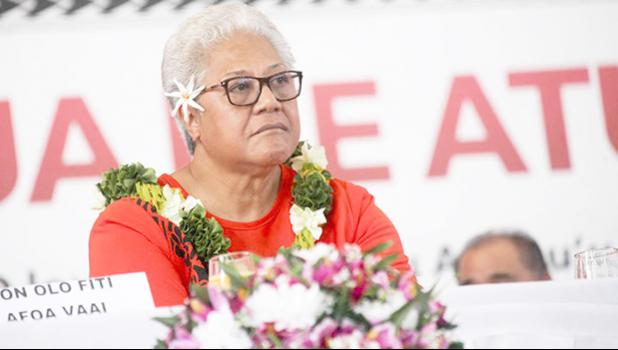 Apia, SAMOA — Samoa's caretaker HRPP administration and its leader Tuilaepa Sailele Malielegaoi have been accused of an unprecedented attack on the rule of law.

The call comes from the winner of April's election, majority party FAST, which has raised concern about what it described as "disturbing developments" in recent days.

This includes the HRRP lodging a complaint to the Judiciary Services Comission, accusing the Chief Justice Satiu Simativa Perese of incompetence.

FAST leader Fiame Naomi Mata'afa held a press conference where she spoke about what her party equates to a brazen attack on the judiciary.

Fiame denied HRPP claims that she and fellow FAST members have been meeting with the Chief Justice and other judges.

"I can say unequivocably that contrary to HRPP's lies and mistruths, neither I nor La'auli nor any member of FAST has met with the Chief Justice or any other Supreme Court Judge, in secret or in private."

The Judiciary Services Comission sat yesterday to consider the HRPP's comlpaint, with a decision yet to be reached on the accusation of incompetence.

"It is concerning that the caretaker is now seeking to suspend or remove the Chief Justice while a sitting of the Court of Appeal is pending this Friday on highly important matters," Fiame said.

It's now over three months since Samoa's national election, and Tuilaepa shows little sign that he is willing to relinquish power despite the fact that his party has lost its majority and has only 19 seats to FAST's 26.

"We have seen the unconscionable and dirty tactics played out by a man who refuses to accept defeat and now in the last desperate attempt to retain power, we have their attack on the Rule of Law," Fiame said.

The Samoa Supreme Court has refused to allow an HRPP election winner, Tuisa Tasi Patea, in Sagaga 4 electoral constituency and the challenger, FAST's Tagaloatele Poloa, to withdraw their petitions.

The Samoa Observer reports the two parties had already advertised their intentions to withdraw the election petitions with Tuisa agreeing to resign from office to trigger a by-election.

But when the matter was called on Monday to formalise the withdrawal of the petitions, the court denied the application and set a hearing date for the case.

It will now be heard on July 27th.

Tuisa, who is a lawyer by profession, is accused of six counts of bribery and two counts of influencing voters during polling day.

In a counter petition, Tuisa claimed that the election runner-up, Tagaloatele, committed eight counts of bribery and treating.

HRPP has already lost six of its MPs in the electoral petition process.

This means it has 19 seats while the FAST party has 26.