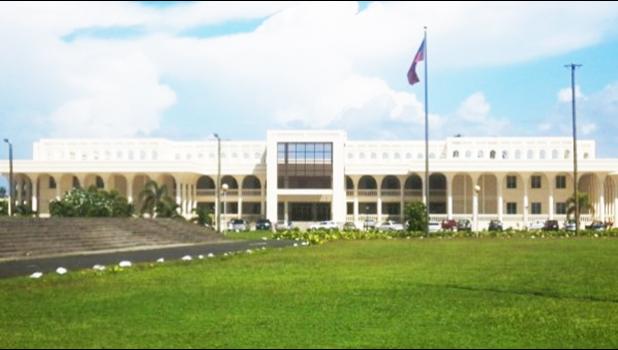 Apia, SAMOA— Despite his clear statement that he does not want to retain an attorney before the Supreme Court, Chief Justice Patū Tiava’asu’e Falefatu Sapolu insisted that Afereti Talato Mapusu seek representation due seriousness of the murder charge against him.

Mapusu from Magiagi struck his son with a machete, which led to his death. The defendant made his first mention last week Monday, where he was first given the instruction to retain an attorney when he appeared in court yesterday morning. He was again ordered to see the court registrar to get an attorney to represent him in court.

As reported earlier, the 14 year old boy was stuck on the neck, he ran to his neighbors house and that’s where he died due to the severity of his injuries. The father was overly intoxicated according to Samoa’s Police Spokesperson, Su’a LeMamea Tiumalu who expressed a huge concern in this case.

“He was overly intoxicated and he couldn't remember why he did what he did. It’s heartbreaking for this young life to be murdered at the hands of his father,” said Su’a. Responding to Samoa News questions, Su’a explained that the incident occurred last week in Falelauniu Uta, where the father was at a drinking session and upon his return home, he got into an argument with his wife. It’s alleged the wife left the house and the father instructed his son to go get his mother, however when the son returned to the house without his mother, the overly intoxicated father struck his son with a machete.

Su’a further stated the child ran to the neighbors’ house for help. The neighbors called the police for assistance. Mapusu’s next appearance will be March 16, 2017 for his third mention and other dispositions.

Apia, SAMOA— Two men are jointly charged in connection with a burglary and both were sentenced to serve time at Tafa’igata Prison. Sentencing was handed down by Chief Justice, Patū Tiava’asu’e Falefatu Sapolu for Fa’afili Isaia and Sigivao Solomona.  During sentencing last week the court laid out the case against the defendant’s Fa’afili 26 and Sigivao 48 were facing one joint charge of burglary and Fa’afili was facing an additional charge of theft as a servant, and the defendants pleaded guilty to the charges against them.

According to the police report, on December 23, 2016 in the evening, Fagafili went to the Twins Supermarket at Vailele and told Sigivao that he is going inside the supermarket to steal some things as he knows a door of the supermarket that is usually not locked. Fagafili then went inside the supermarket while Sigivao stood outside to keep watch for anyone coming and Fagafili returned with $1,700 and gave $200 to his codefendant. The pair was arrested a couple of days after the incident occurred.

According to the pre-sentence report, Sigivao told the probation service that the money he received from Fa’afili was returned to the police. The Chief Justice sentenced Fa’afili to seven months in jail, to be followed by attending the six weeks of counseling while Sigivao was sentenced to six months in jail.

Apia, SAMOA— Supreme Court Justice, Tafaoimalo Leilani Tuala Warren slapped Zhujian Chen with a $1,000 fine for assaulting a man and his mother. Held last week, Chen was charged with two counts of assault, which carries a jail term of up to seven years in prison. The defendant was found guilty on both charges following a bench trial. According to the police report, Chen and the first vicim both run retail shops close to each other and Chen was not happy with the victim about losing bus business to the victim’s shop and he sent a message expressing his anger and threatening to beat up the victim.

The police report says that following a function at the Chinese Embassy on January 28, 2016, Chen stopped at the victim’s shop to buy water and inquired about the victim’s whereabouts. The victim found out that Chen was looking for him and so he called Chen on his cell phone and they agreed to meet. It’s alleged the victim informed his parents of the meeting and went with his father. However upon arrival at the location, the victim’s mother was also there and she confronted Chen who then punched her once on the head with a closed fist. The mother fell down and then the victim and his father came running to her aid.

The police report says that Chen assaulted the victim by punching and kicking him, while his mother was hugging him. The victim sustained a mildly swollen upper lip and a left elbow abrasion after the beating. Both the victim and his mother were medically examined at hospital. The victim’s mother had no visible physical injuries, but complained of headache and dizziness.

Tafaoimalo pointed out that the victim says that apart from the physical injuries, he still feels angry and disappointed with Chen. “He finds it hard to move on as his security and safety were affected by the actions of the accused. He continues to feel sorry for his elderly parents and the impact this has had on them. He says that the local Chinese community now frowns on him and his family for reporting the matter to Police, which has in turn affected his business relationship with other Chinese business people.”

The Supreme Court Justice also notes that there has been no reconciliation or apology by the defendant. Tafaoimalo finds it aggravating the second victim was an elderly woman and she was vulnerable given her age and this goes against the Samoan cultural respect for elders.

“The impact on both victims is an aggravating factor. Both have expressed difficulty in moving on after the offending as it was such a traumatic experience for both. I find this offending was premeditated given his anger at victim about the bus situation.”

Tafaoimalo stated that having taken into account the aggravating features of the offending, she finds that for the accused, a non-custodial sentence is appropriate. “I am concerned about his lack of remorse in being unwilling to make amends with the victims, but I am satisfied that this experience alone, in being arrested, having to appear in Court and receiving a conviction, has had an impact on him and has alerted him to the dangers of handling issues in an unacceptable and unlawful way. Perhaps his response is due to his age and immaturity. It is fortunate however that both victims did not sustain significantly serious injuries, although the emotional scars borne by both victims are immense and incalculable.”

Chen was sentenced to12 months probation and ordered to pay a fine of $1,000 in default for six months in jail.