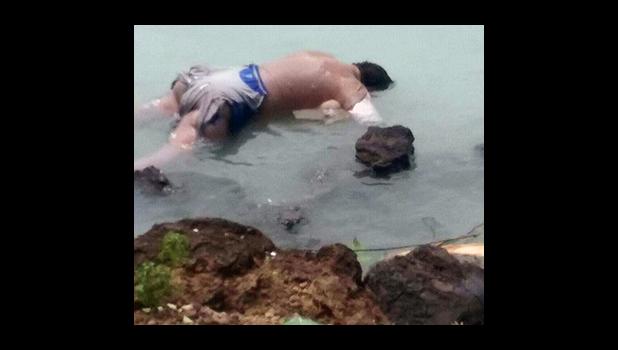 Apia, SAMOA — A man who appears to be in his late 30s was found floating in the sea near Levi Sale’imoa earlier this week and efforts to find this man’s family have been unsuccessful, says Superintendent and Police Spokesperson Su’a LeMamea Tiumalu who said they will reach out to the neighboring islands, including American Samoa, Tuvalu and Tonga, to find out if there is a missing person on their watch.

According to Su’a the matter was reported to the police but the man’s face had been decomposed making it hard to identify who he is. One identifying feature, however, is he has a tattoo on his left arm with a flower and the word “warrior.”

According to Su’a the matter is being treated as a homicide as there are signs of injuries to his body, however that determination will be made following an autopsy that will be performed on the body soon and the police will go from there. In the meantime, Su’a has reached out to the public for assistance seeking a family who may be looking for a missing member of their family.

Su’a said the man has bruises and injuries on his chest, but they can’t be sure how these occurred, as the man was found floating in the ocean. He said they have also reached out to fishermen asking if anyone knows of this man but there seems to be no one coming forward.

Another case the police are investigating is the death of a 33-year-old “tomboy” according to Su’a. He said during the weekly press conference that the young woman consumed parquet.

“According to preliminary reports, the tomboy was in a fight with her friend and then she drank the parquet and her life ended not long after that.” Su’a stated that the police have ruled this yet another suicide case and they will not perform a post modem for this case.

Last month there were at least five suicides cases of men and women consuming parquet and Su’a stated that the government continues to support the NGO’s who are conducting sessions and talk shows aimed at those who feel the need to take their own life and they will continue support these efforts to assist the public.

In other police news, Su’a stated that there was one vehicle accident that occurred in Tiavi last week and the driver has since been arrested and charged with reckless driving.