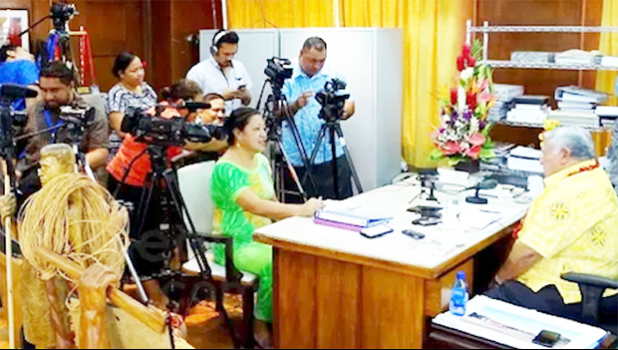 Apia, SAMOA — The lawyers for the FAST Party in Samoa have been forced to withdraw a Supreme Court challenge after discovering they had the wrong information.

They had wanted the rival HRPP winning candidate in the Fa'asaleleaga 5 constituency, Peseta Vaifou Tevagaena, declared ineligible to sit in parliament, because of a criminal conviction that hadn't been disclosed to the Electoral Commission.

But the lawyers yesterday asked the Supreme Court to withdraw the challenge after realizing they had had their wires crossed.

RNZ correspondent, Autagavaia Tipi Autagavaia, said the charges Peseta had faced carried penalties that would not have barred him from entering parliament.

Meanwhile FAST has been directed by the court to re-enter its submission challenging the appointment of a sixth woman to the new parliament.

Autagavaia said the judges told the FAST lawyers they need to specify the grounds for their challenge, they were also told by the judges to amend the motion and to include that.

"So that is another matter that needs to be tidied up, so hopefully by Monday next week we will have everything settled, we tidy up the house and begin the proceedings," he said.

FAST has asserted that with five women elected in the poll two weeks ago the constitutional provisions to have at least 10 percent of parliament's seats filled by women were satisfied.

The difficulty arises with the fractional increase in the size of parliament to 51 seats, meaning that those five women only constitute 9.8 percent of the seats.

Samoa could go back to the polls

Samoa could end going back to the polls should a tie of 26/26 between the Human Rights Protection Party (HRPP) and the Fa’atuatua i le Atua Samoa ua Tasi (FAST) party ensue.

The caretaker Prime Minister, Tuilaepa Sa’ilele Malielegaoi, told the media earlier this week of the possibility of a united government to avoid Samoa having a hung Parliament.

“If I call Parliament to meet tomorrow with such numbers 26/26, then there is no other way but to ask the Head of State to dissolve Parliament and call fresh elections,” said Tuilaepa.