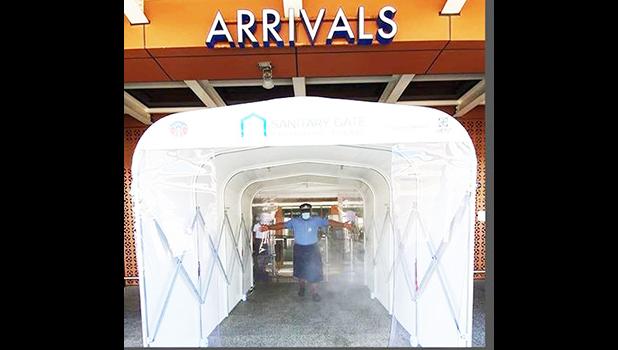 The Public Health Corridor concept works to facilitate flight operations while preventing the spread of Covid 19 through the Aircraft, the Crew, Passengers and the Terminal and it is through this initiative that the SAA pursued the sanitary gates, which have been internationally utilized by the health and aviation sectors since the pandemic.

Under the Public Health Corridor initiative, the Airport is operating under the 4 C’s concept of ‘Clean Aircraft, Clean Crew, Clean passengers and Clean Terminal’ The sanitary gates in addition to other measures already in place covers not only the arrival of passengers but also before they leave the airport premises.

“The goal is that we provide a last attempt at eliminating the risks of infectious bacteria carried on all surfaces by keeping to the principles of the Public Health Corridor which essentially is an end to end management of the passenger flow from arrivals to when they depart from the airport premises,” said Silimana’i Ueta Solomona, SAA’s General Manager.

“With a 99% success rate noted by international subject matter experts, they have been tested and deemed safe for the elimination of pathogenic microbes without side effects.  The sanitizing substance is sprayed from a compressed air spraying system, while the tunnel is used to keep the sanitizing agent in the environment while people are walking through, increasing the level of disinfection.”

According to SAA, this milestone achievement has been in the pipeline for the last 6 months as part of SAA’s COVID Preparedness Plan in collaboration with the Ministry of Health and the NEOC.

“Sanitary gates, like the thermal temperature cameras are just some components of the Public Health Corridor initiative, this does not in any way take away the health screening procedures in place, they are part and parcel of our combined efforts in assisting the Ministry of Health and NEOC as much as we can in keeping Samoa safe,” said Silimana’i Ueta Solomona.

The Sanitary Gates were funded by World Bank through the Samoa Airport Investment Program and will be in operation on an ad hoc basis for Cabinet approved and repatriation flights.