SSAB investing in future of Samoa with scholarships 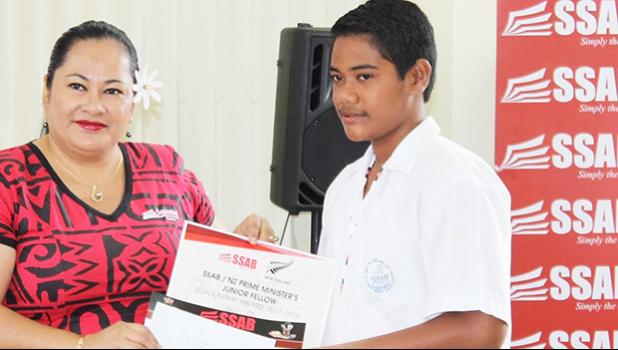 Apia, SAMOA — Aside from providing the products they sell, Samoa Stationery and Books (SSAB) is also investing in the future of Samoa through their SSAB- New Zealand Prime Minister’s Fellow Scholarship Award program which started back in 2015, according to SSAB’s CEO Fiti Leung Wai.

On the SSAB’s Facebook page, it was announced that SSAB's Scholarship program commenced two years ago, which is drawing much interest from the people of Samoa.

“SSAB has decided to continue this same philanthropic program for the benefit of the young schoolers in primary and college within the country (Samoa).” According to SSAB, a total of 20 students from different schools in Apia and Savai'i were recipients of the scholarships. “SSAB invested a total of WST$20,000 into the Scholarship program,” it announced.

SSAB said that more than $WST50,000 was also spent in the “Back to School Campaign” that comprises four different promotions with international and local partners for the benefit of our Samoan people. Each Scholar received 500 tala cash to assist with school fees and 500 tala worth of SSAB vouchers.

Numerous leadership programs and other educational activities for these scholars will be conducted throughout this year by SSAB, and the recipients are also entitled to study in SSAB’s staff children's library during their year of being SSAB Scholars.

Responding to Samoa News queries, SSAB CEO and President said that it was last year they increased the award to 20 recipients.

To select their scholars, she said they select the top 20 schools with the most purchases at SSAB during our Back To School campaign in January and February 2016 and it’s the schools that choose the scholars. “We just write to them to pick someone deserving to be awarded with the scholarship; someone who is diligent and a great leader. This year, I’ve decided to retain them as they are such exceptional students.”

Mrs. Leung Wai says that they are also looking to run a leadership course for them and an Ambassadorial Program.

She told Samoa News that the scholarship program started when she was the recipient for the NZ Prime Minister’s Fellow Award and this award is bestowed upon a person who is contributing to the community and perceived to be an emerging leader.

“I was therefore honored and humbled when I was given this award by the NZ Prime Minister; and to God I give all the glory and honor. I know that if I were not educated, I would never have been recognized and bestowed with such a prestigious award. Receiving such an award has inspired me to give back to my community by bestowing my own annual scholarship award to a young female student who is conscientious, diligent and a potential leader.

“Plus that person must love books like me. The award will consist of $500 cash and $500 worth of stationery and books. The recipient of the award will also be part of an attachment program to SSAB and to be personally mentored by me,” the CEO of SSAB said.

The Samoa Observer reported on one of the SSAB scholars, Joycemarie Toafa, a Year 13 student at Samoa College, who has been a scholar recipient for three consecutive years. She said, “I mean who would have thought that a person like me could get this kind of blessing?

“In working and having that experience around the SSAB staff has been amazing and I couldn’t thank them enough for this great opportunity.

“The marks that I have been receiving ever since the program started has been remarkable and my school work and school life has been increasingly amazing since this program.

“I come from a family who don’t really have much. Getting this scholarship and being able to retain it for three years has taken a load off my parents shoulders,” she said.

Toafa also noted that Mrs. Leung Wai had inspired her in many ways, especially with her themes every time she stands up to say a speech — “she always talks about giving back to the community.

“So for me, I am an only child, and I have always been selfish but through this program I have learned from Mrs. Leung Wai that by giving something whole heartedly without expecting anything back, God will bless you abundantly.”