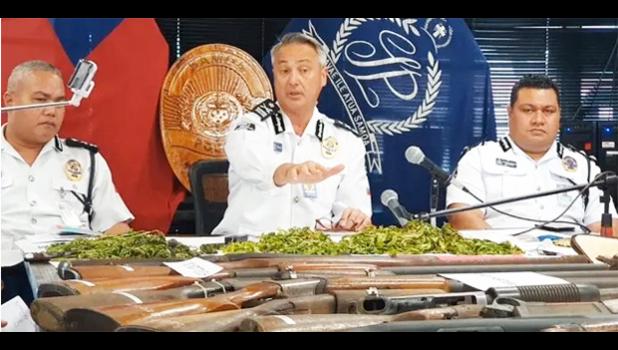 Methemphetamine, cash, weapons, marijuana plants and a rental car were confiscated by police during an incident at the notorious Faleatiu village.

A Moana Rentals vehicle found at the location has been impounded by police.

Su’a Fuiavailiili says their investigations are now focused on how the methamphetamine is being brought into Samoa.

“The information we have right now leads us to believe this is not being manufactured in Samoa, it’s coming from somewhere..”

“So how is it getting through our borders?.. we have to work together with our partners to make sure strict measures are put into place at our borders.”

The Police Commissioner stressed the need for border agencies to work together, if the war against drugs is to be won in Samoa and across the Pacific region.

The Police Commissioner also gave an undate of Samoa’s three month gun amnesty that goes to the end of December 2020.

He acknowledged the support of the Australian Federal Police (AFP) and confirmed that 56 guns had been turned in so far.

Illegal weapons such as hand guns displayed may look old and rusty, the Commissioner says, “but they do fire and they can kill”.