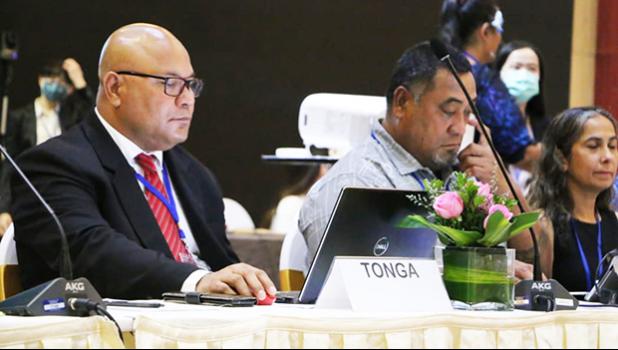 Da Nang, VIETNAM — The head of Tonga's delegation to the Pacific Tuna Commission meeting underway in Vietnam is calling for more unity and cooperation as delegates haggle over the management measures for the multi-billion dollar fishery.

The chief executive officer of the Tonga Ministry of Fisheries, Tu'ikolongahau Halafihi, is attending this year's meeting of the Western and Central Pacific Fisheries Commission (WCPFC) - the regional fisheries management organisation responsible for tuna - in Da Nang, Vietnam.

There are 26 countries and participating territories in the commission comprised of the resource owning island countries and the foreign fishing nations whose fleets travel thousands of kilometres to fish in the tuna-rich waters of the Pacific.

And they do not always see eye-to-eye.

Dr Halafihi said his country's tuna fishery, though small compared to other Pacific nations, is crucial to the livelihoods of Tongan people and government revenue.

"This is very important for us, it is the main fisheries for us in terms of volume and value. Tuna fisheries supports food security and also supports the economy of Tonga," he said.

Annually, on average, Tonga's tuna fishery brings in $10 million pa'anga - about $US4.2 million.

Tu'ikolongahau Halafihi said this is based on Fresh-On-Board prices which is a lower value as the buyer has to bear all costs and risks of the goods from the port of shipments.

"FOB value, let's say that is the local value for that, but the exact value for tuna for the exporting of tuna is much, much higher but that is the value we use for calculate the exports," said Dr Halafihi.

Longline is the main method of fishing in the country - and while there are two local companies, most of the vessels operating in Tongan waters are Chinese and Taiwanese boats registered and working out of Fiji with locals often employed as crew.

The commercial species mostly targeted is the South Pacific albacore one of the more at-risk tuna species in the region.

According to a WCPFC report on the status of the stock in February this year there has been no stock assessment of South Pacific albacore since 2015.

The commission's Scientific Committee report reiterated the great concern for the stock expressed in earlier reports if recent catch effort levels are maintained.

'MAIN MESSAGE IS SOLIDARITY AND COOPERATION'

Tu'ikolongahau Halafihi said Tonga and other Pacific Islands need to work together with the countries who come to fish in their waters to protect the resource for future generations.

"I think the main message from here is solidarity and cooperation, working together because we can't manage the resources by ourselves, we have to work together.

"National, regional and also international we have to work together, some kind of collective effort in order for us to manage the resources" Dr Halafihi said.

The Western and Central Pacific Fisheries meeting resumes today with some of the measures before the commission including tuna harvest strategies, addressing some of the atrocious labour conditions in the fishery and sharply-contested shark conservation measures.

This regional fisheries management organisation, also known as the Pacific Tuna Commission, has a unique consensus approach to most if not all of its decision-making.

The approach is a double-edged sword as it promotes universal compliance at the expense of stronger conservation measures.

It is also expected today that the commission will officially announce its first-ever woman Executive Director in former commission chair, Rhea Moss-Christian, of the Marshall Islands who will take over from long-serving Tuvaluan executive Feleti Teo next year.

The other candidate who contested the role was Cook Islands Lara Manarangi-Trott, also a highly experienced fisheries expert and compliance manager for the Western and Central Pacific Fisheries Commission.

All of the Pacific Tuna Commission meetings and deliberations are closed to mainstream media.

Its projections indicated the risk of South Pacific albacore stock falling to an undesirable level is more than 20 percent under a business as usual scenario.