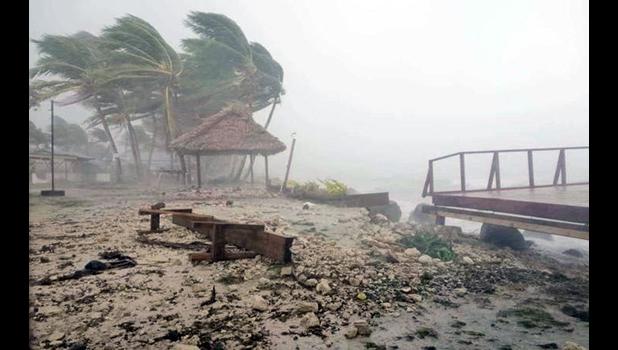 The storm was expected to pass directly over Tongatapu overnight with the capital, Nuku'alofa on track to take a direct hit, instead the cyclone just passed to the North of Tongatapu without its high winds and heavy rain.

But the northern Tongan groups of Vava'u and Ha'apai were being hammered by destructive storm force winds and torrential downpours, with gusts estimated at 180km/hr yesterday.

Cyclone Tino has now weakened as it continues to move away from the islands of Tonga.

The cyclone has been downgraded to Category Two storm with winds up to 120 km/hr and momentary gusts up to 140 km/hr..

Emergency officials are meeting this morning, and have teams in the outer islands ready to start assessments

A short time ago the Cyclone Tino was around 435 kilometres East-Southeast of the Tongan capital of Nuku'alofa, heading southeast.

Paula Ma'u, director of Tonga's National Emergency Management Office (NEMO), told Matangi Tonga online yesterday evening that there were no casualties or injuries reported from throughout Tonga from the large cyclone.

"Our Met Office says the face of Tino was to the North where all the wind and rain was, but on the South side it turned a large blind eye on Tongatapu, even though it was so close."

"It is surprising to see the effects of nature," he said.

Nuku'alofa and Tongatapu, home to most of the Tongan population, along with nearby 'Eua, are still recovering from extensive damage caused by Cyclone Gita only two years ago.

Dozens of evacuation centres were opened in Tonga in preparation for Tino and people were being urged to hunker down as Cyclone Tino moved closer to the Kingdom.

Paula Ma'u said the coastal areas of Tonga have been hit hard by storm surges from Cyclone Tino, which passed over Tonga at high tide.

Nomuka, located between Ha'apai and Tongatapu, was closest to the centre of the storm.

"We will start in Tongatapu to conduct a survey exercise covering the coastal areas, and agriculture and the villages. This will also be done by our teams in Ha'apai, Vava'u and the outer islands." he said.

Airlines are rescheduling passengers for Monday.

On Saturday, gale warnings had also been issued for Niue, and in Samoa, authorities there warned of the possibility of landslides and flooding. Strong winds fanned by Cyclone Tino had also brought down power to swathes of the main island Upolu, including the capital, Apia.

In Tuvalu, hundreds of people were evacuated from their homes, with strong winds and giant waves churned up by Cyclone Tino causing extensive damage across the country.

Few of the country's 14 islands were spared damage, said Sumeo Silu, the director of the country's disaster management office. Two hundred people had been evacuated on main island Funafuti alone, he said, as reports of significant damage to infrastructure came in from outer islands.

"It's quite devastated," Mr Silu said.