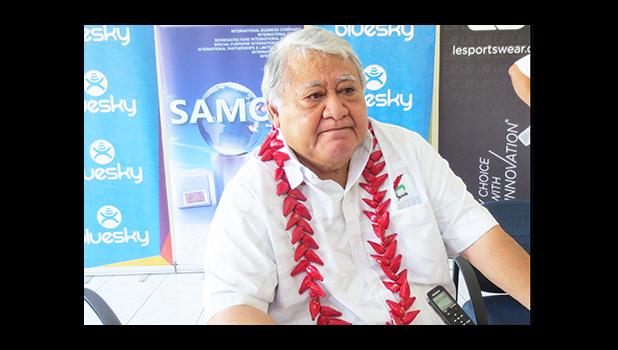 Apia, SAMOA — Improved transportation in and out of Apia, and Tui Samoa Cable, Apia Water Front Development project were among the highlights of the year 2016 that Prime Minister Tuilaepa Sailele Malielegaoi spoke about when he addressed Samoa on New Year’s eve at his office yesterday afternoon.

Tuilaepa extended his warmest greetings to our people, relatives, friends and visitors from abroad who are here for the festive season. “We give thanks to our Lord God for His unceasing love and guidance over the last year. We farewell 2016 with much satisfaction of our achievements, and take forward to 2017 lessons to fortify government’s efforts, in strengthening our country’s economic development, and to make our homes and communities safer.”

The Prime Minister pointed out that the general elections in March 2016 reaffirmed the public’s continuing support for the Human Rights Political Party, to remain at the helm of government. “I remain humbled by the continuing confidence and trust in the HRPP led government. Our determination and commitment is as strong as it has always been throughout our time in government, to do the best for our people and country. Our economy picked up strongly last year following strong growth in fish export, notable gains in accommodation and restaurants, and remarkable growth in the transport and construction sectors, with a number of government projects currently under construction. This has consequently led to real GDP (gross Domestic product) growth of 6.4% for 2016 compared to 2% in 2015.

“I would like to acknowledge with gratitude the hard working public servants, private sector and the local communities whose efforts, sheer determination and assiduousness, have led to the manifestation of many accomplishments for Samoa.” Tuilaepa noted that some of the major highlights of the year include the completion of the four-lane roadwork on the west coast road, which has greatly improved transportation in and out of Apia Township. This roadwork will continue further towards Faleolo international Airport and the wharf at Mulifanua. He also noted construction for the single span Leone bridge has commenced, and will soon be followed by new bridges at Vaisigano and Maliolio in Savaii.

He said that first phase of the Integrated Aviation project involving the new departure lounge for the Faleolo Airport, was completed in November. “This project portrays Government’s commitment to the development of tourism, in providing modern facilities for the comfort of traveling passengers, as well as facilitating larger aircrafts bringing more tourists to our shores.”

Government is also committed to boosting its economy through tourism, with its investment in the Apia Water Front Development project that extends from Mulinuu to Taumeasina, for a major facelift in its town area. The project will include recreational parks and fun activities for families and tourists.

In the hope of strengthening Samoa’s domestic and international connectivity, the government through the Samoa Submarine Cable Company signed a turnkey contract with Alcatel-Lucentt Submarine Networks, to roll out a new submarine cable system called Tui-Samoa cable that is laid between Samoa and Fiji. This project is expected to provide advanced high-speed broadband highway, for inclusive social and economic growth.

He also spoke on the issue of climate change. “The detrimental impacts of Climate Change continued to be felt worldwide and especially in Small Island Developing States like Samoa. The government will continue to work in collaboration with other Small Island states, to open new windows of opportunities for financial assistance, to help with its climate resilience efforts, and to achieve sustainable development goals. In December, the Government hosted the Green Climate Fund (GCF) Board meeting in Apia. The meeting attracted 400 delegates from all regions of the world, and was the first to be held in the Pacific.” He said the meeting culminated in the approval of 4 project proposals from Small Island Developing States, including Samoa’s proposal of SAT$143 million, for integrated flood management to enhance climate resilience of the Vaisigano catchment.

“These funds no doubt will greatly enhance economic activities in the country in the coming years. In this connection of realizing our country’s aspirations, I would like to express our deep gratitude to governmental development partners including Australia, China, European Union, Japan, New Zealand, and the United States, as well as the key international organizations supporting our development efforts including the World Bank, the Asian Development Bank, the International Monetary Fund and the United Nations Agencies. The government continues to seek more avenues to provide new employment opportunities for our people. This has been realized through the Seasonal Employment Programs with New Zealand and Australia.”

This year saw the number of seasonal workers being deployed to New Zealand and Australia exceeds 1600 for the first time. “It was also the first time that qualified and experienced local builders from Samoa were recruited under the first trades’ project - the Canterbury Pilot Program for Christchurch, New Zealand. It is anticipated that more trade will open up seasonal employment opportunities for our people including fisheries and tourism.”

The undoubted high points were Lupesoliai Laaulialemalietoa Joseph Parker’s historic achievement, in becoming the first Samoan, to be crowned Heavyweight Boxing Champion of the World, and Ele Opeloge’s tremendous achievement, in finally being awarded her Beijing Olympics Silver medal - the very first for Samoa – that she was deprived from rightfully receiving on the Olympic dais. He further stated that Lupesoliai Joseph and Ele have set the benchmarks for which our athletes to aspire. He also noted that last week, His Highness, the Head of State, Tui Atua Tupua Tamasese Efi, offered Christmas greetings and encouragement to the people to strive for excellence through faith in God. “In this same vein, I encourage all our people to never give up in doing good deeds for yourself, your family and for Samoa. – In God, all things are possible. I wish every family and the people of Samoa, a glorious and safe New Year.”