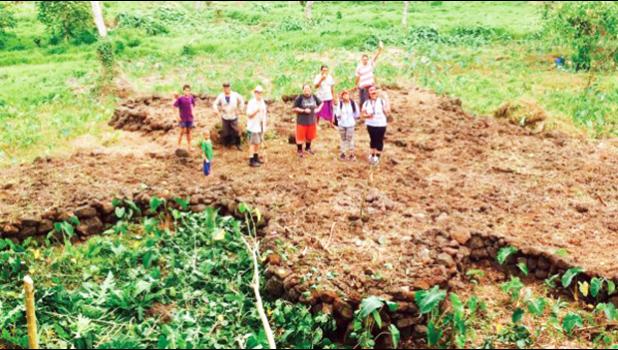 By
Sina Filifilia Seva’aetasi, Samoa Observer
Most of us have heard of the massive Macchu Picchu Incan citadels in Peru and the humongous mysterious stone heads looking out on the shores of Rapa Nui.

Now, we have the ginormous star fields, in the hidden forestry of Savai’i.

This week, a research team from the Centre of Samoan Studies presented their findings during their archaeological survey of the inland areas of the villages of Vaito’omuli, and Fa’ala in Savai’i.

The project is called The Documentation of Samoan Archaeological and Built Heritage Places and Associated Oral Traditions (A.F.C.P) funded by the U.S. Embassy.

The team consisted of five National University of Samoa lecturers, and 14 students.

The team also featured archaeologist Gregory Jackmond, who last surveyed the land in the 1970’s.

Mr. Jackmond mapped an extensive antic net settlement of over 200 hectares inland of Vailoa village, in original on the Nelson family owned Plantation.

However, the team found large platforms as well as giant walls and walkways that suggest that there were far more people living inland than previously suggested and therefore a greater number in population size.

During the presentation Mr. Jackmond said that it was a long held belief that prehistoric Samoans lived mainly on the coast.

Phase 2 of this project will kick off in June.

Read more at the Observer