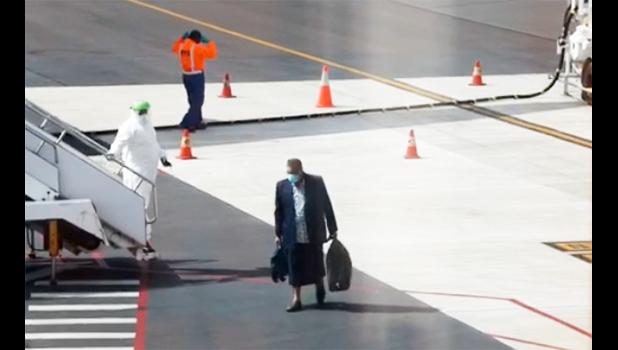 Apia, SAMOA — Samoa’s newly announced Chief Justice along with several other passengers described as VIPs who arrived into Faleolo International Airport on Friday afternoon have been moved to and from three separate hotels in the past 24 hours.

Now at the Orator Hotel at Siusega, the group were first taken to Le Manumea hotel near Vailima, before they were transferred out of there and into Samoana Hotel across from Apia Park, where they stayed on their first night in Samoa. However the next day on Saturday, they were shifted once again – this time to Orator Hotel where it is expected they will remain for the required isolation period.

However, the Prime Minister in a live interview earlier this week did refer to 10 passengers arriving on the 22nd of May, however in his next interview he said there were only six. Either way and despite the Prime Minister’s announcement of people arriving on Fridays flight, the necessary quarantine arrangements were not set prior to their arrival.

The repatriation flight was originally set for 22 May however Government announced its postponement to next Friday 29th May 2020 to allow passengers time to fulfill the entry requirements for Samoa.

As set by Samoa’s State of Emergency Orders, all repatriated passengers are to be quarantined for 14 days upon arrival into Samoa.