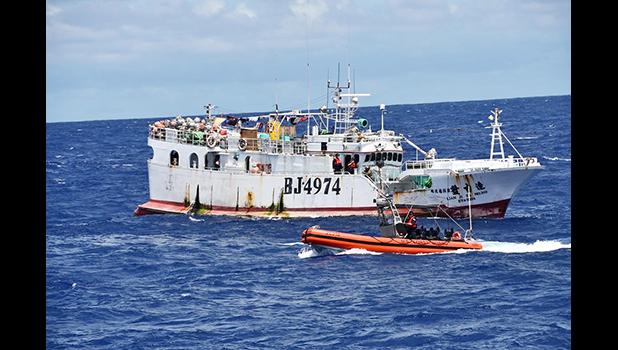 During their expeditionary patrol across Oceania, Oliver Berry’s crew is collaborating with partner governments like Samoa to conduct bilateral shiprider boardings to strengthen maritime domain awareness and resource security within their EEZs; an EEZ is the area of coastal water within a certain distance of a nation’s coastline to which the country claims exclusive rights for drilling, fishing, and other economic ventures.

These programs highlight the shared commitment to ensuring security and freedom of navigation in the Pacific.

“Collaborating with our partners throughout Oceania is essential in ensuring a free and open Blue Pacific,” said Lt. Cmdr. Micah Howell, commanding officer of the Oliver Berry.

“It is a privilege and we are proud to support Samoa through dedicated partnership in the effort to maintain maritime governance and security.”

Oliver Berry’s crew also enjoyed a multitude of community engagements during their time in Samoa. These engagements included crew visits to the National University of Samoa Maritime School and Samoa’s Victim Support Camp, and a beach cleanup with staff from the U.S. Embassy, Peace Corps, and Samoa Tourism Authority.

The crew also provided tours of Oliver Berry for the Maritime Division of the Ministry of Police, Prisons and Corrections Services, the Ministry of Works, Transport and Infrastructure, the Ministry of Agriculture and Fisheries, members of the media, and students from the National University of Samoa Maritime School and St. Mary’s College.

Oliver Berry’s crew will continue patrolling the Blue Pacific across the high seas in support of Samoa, Tonga, and Kiribati to combat illegal, unregulated fishing, demonstrating the United States Coast Guard’s enduring commitment to partner nations throughout Oceania, according to the release.