Weather system in Fiji strengthens to a tropical cyclone 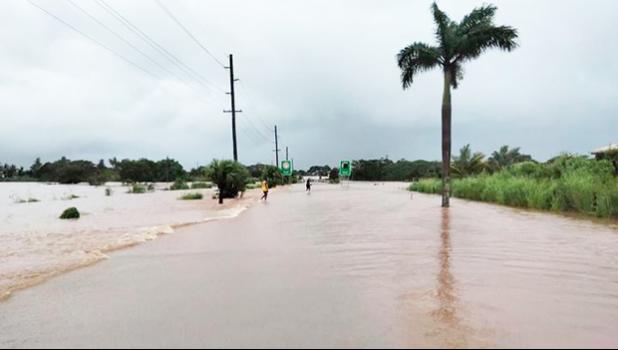 Nadi, FIJI — The tropical depression slamming parts of Fiji has now strengthened to a category 1 tropical cyclone according to the Fiji Meteorological Service.

The Fiji Met Service said tropical Cyclone Cody is expected to intensify in the next few days.

It said at 6am local time, Cyclone Cody was located to the Southwest of Kadavu.

"TC Cody is moving towards the Southwest and gradually moving away from the Fiji Group," said Fiji Met.

On Sunday, the National Disaster Management Office said a 35-year-old man from the western town of Tavua drowned while trying to cross a flooded river.

Over 300 people are currently taking shelter in evacuation centres around Fiji.

Five people have died from Covid-19 in Fiji as health authorities battle a third wave of the coronavirus amid a cyclone that's bearing down on the nation.

Dr Fong said the five victims all died at home including a 27 year-old man.

"Of the 1,280 cases recorded since the last update, 619 cases were recorded in the Central Division; 535 in the Western Division, 114 in the Northern Division and 12 cases in the Eastern Division," Dr Fong said.

Dr Fong said an 89-year-old woman from Taveuni in the north of the country died on 4 January and had pre-existing medical conditions. She was not vaccinated.

He said a 55-year-old man from Nausori also died on 4 January and had a pre-existing medical condition. He was fully vaccinated.

"A 61-year-old female from Caubati in Nasinu who died on 06/01/22) had multiple pre-existing medical conditions that contributed to her death. She was not vaccinated.

"The fifth Covid-19 death to report is of a 27-year-old male from Nausori who died on 07/01/2022. He had a significant predisposing medical condition that was assessed by the attending doctors to have contributed to his death. He was fully vaccinated."

Dr Fong said there were 636 other Covid-19 patients who had died from serious medical conditions they had before they contracted the virus. "These are not classified as Covid deaths."

"The high positivity rate is an indication of widespread community transmission and that the cases reported are a significant underestimate of actual numbers.

"As we continue to record new cases of Covid-19 throughout the country, the public is reminded of the need to maintain public health and social measures that are helping in suppressing the transmission of the virus in our communities so that hospitalization numbers remain low."

There are 162 Covid-19 patients in hospital in serious condition, Dr Fong said.

"When a large number of people get infected within a shorter period of time, even a smaller percentage of people becoming severely ill may still mean a large number requiring hospitalization, which will put pressure on our health system.

"The public is also reminded that for now, we are prioritizing our testing to individuals at higher risk of severe disease to ensure that they are assessed early, referred to an appropriate health care facility, and managed promptly if their symptoms deteriorate."