What does the US presidential election result mean for the Pacific? 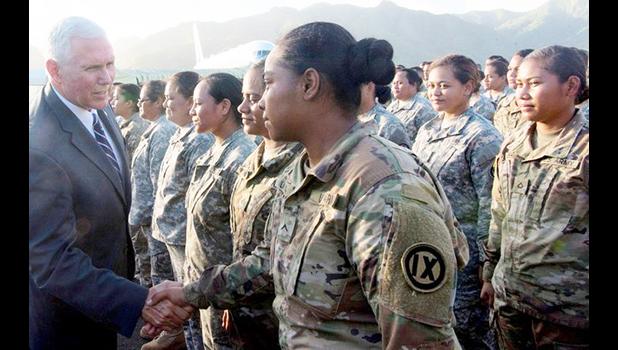 Auckland, NEW ZEALAND — Congratulatory messages continue to pour in from Pacific leaders to the US president-elect Joe Biden but what does the change of the guard in Washington DC really mean for the Pacific?

RNZ Pacific spoke with some political experts and commentators around the region about the potential impacts of the upcoming presidency.

Starting with political scientist and director of the center for Pacific studies at the University of Hawaii Manoa, Dr Tarcisius Tara Kabutaulaka.

Kabutaulaka said the most important issue for Pacific Island countries was climate change and Joe Biden's victory was a boost to the campaign for global climate action.

"The United States officially pulled out of the Paris [Climate] Agreement on Wednesday last week," he said.

"One of the promises that the Biden government has is to re-commit the US in addressing climate change issues."

Kabutaulaka said this included re-committing the United States to international agreements like the Paris Climate Agreement.

"That is a very big issue for Pacific Islands countries," he said.

"Because they have been pushing for a very long-time for developed countries or industrialised countries, like the US, to be committed to issues of climate change."

In addition to this, Kabutaulaka said Biden also campaigned on the US looking at making the transition from a fossil fuel-based economy to one based on more sustainable renewable energy sources.

"It will not have an immediate impact on the world...particularly Pacific Island countries that are already affected by climate change.

"If that were true and the US were to make that commitment and the transition then it could mean that other countries in the world will follow the US example.

Along the same lines, Tarcisius Tara Kabutaulaka, said United States environmental aid to the Pacific was likely to be redefined under a Joe Biden presidency.

In recent years the US had committed hundreds of millions of dollars to the region, through its 'Pacific Pledge', for economic development, environmental resilience and more recently to help with Covid-19 responses.

But Kabutaulaka said the environmental component of the funding had proved contentious under the Trump administration.

"Given the fact that climate change was the most important issue for Pacific Island countries there was a lot of questions about what environmental resilience meant," he said.

"I think that will be redefined under the Joe Biden government."

THE TIP OF THE SPEAR

Now when it comes to the Pacific, the region of most strategic importance to the United States is the north-west, the so-called 'tip of the spear'.

Northern Marianas historian Don Farrell, was quite emotional about the result, having to pause to compose himself a number of times.

Farrell said the past four years under Donald Trump had been very tense for people in the Northern Marianas.

"He [Trump] has led us into a potential military conflict in the Western Pacific," Don Farrell said.

"His fight with China and North Korea just frightened us very, very much."

Farrell said the Trump administration's lack of comprehensive foreign policy made the future seem very uncertain for many in Micronesia.

He said it is such a relief that is now behind them knowing the president-elect, Joe Biden, has a completely different attitude towards foreign policy issues.

"We are looking forward to a transition that will bring in a comprehensive group of professional staff at all levels in all agencies in Washington DC that will allow us to have stability and the ability to help drive forward our own desired futures," Don Farrell said.

Outside of Micronesia, there is what has been described as the somewhat neglected US territory of American Samoa.

Former US Peacecorp volunteer-turned-local publisher John Wasko had been a resident of the territory for 40 years.

He said the jury was still out on what a Biden administration could do to improve the lot of American Samoans.

Wasko said for all the jubilation among democrats and Biden supports the issue of systemic racism in the United States still needs to be addressed.

"In many ways American Samoa kind of fits into that demographic," John Wasko said.

Wasko said even compared to the poorest parts of the United States, public services like education and health in American Samoa were underfunded.

He said there were also parts of American Samoa's legislation that were at odds with the US.

"We do not enjoy the benefits, for instance of US minimum wage," Wasko said.

He also said the birthright of American Samoans was not US citizenship, they were considered US Nationals without the full benefits and voting rights of other Americans.

Wasko acknowledged the cultural considerations from which some of this uniqueness arises but said the fact that American Samoans were not even given a choice between full citizenship and the US national status is questionable.

"This prevents many American Samoans from ever being employed by the National Government, not having the same voting rights in the United States or even the same immigration rights."

Joe Biden is set to officially take up office on 20 January which means Donald Trump hangs on to power for two more months.

Don Farrell said that was when things would really get interesting.

"I don't want to rub salt in a wound but my guess is right now he [Trump] has got his attorneys working hard to try and keep him out of jail after January 20th."