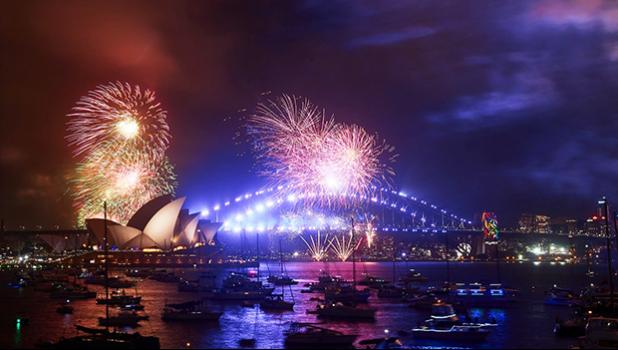 By
Helena Horton, The Telegraph UK

The New Year has officially begun, as midnight passed in Samoa, Tonga and Christmas Island/Kiribati, the first places in the world to welcome in 2018.

The last places on Earth to see in the New Year are minor outlying US islands like Baker Island and Howland Island - although these are uninhabited. The last inhabited island is American Samoa which will welcome 2018 when it's 11am in London on January 1.

When major cities will welcome 2018

New Yorkers have been warned as they prepare for one of the coldest New Year celebrations on record.

Revellers have been told to bring handwarmers, wrap up warm and avoid alcohol as they flock to Times Square, which is due to hit a frosty 11 degrees celcius, which would tie for second place with 1962. The coldest ever recorded New Year's Eve at Times Square was in 1917, when it was -17 Celsius at midnight.

Drinking alcohol is warned against because it causes body temperature to drop faster. Partygoers have been told to cover all exposed skin.

Sydney, Australia rang in the New Year at 1pm UK time, after a family-friendly firework show earlier in the evening. The Opera House could be seen illuminated by the fireworks as an estimated 1.6 million people gathered to watch.

"It'll promote Sydney to the world. There'll be a billion viewers out there watching."

Melbourne also celebrated in style, with  14 tonnes of fireworks launched from the top of 22 city buildings.

Record numbers were expected to show up to New Zealand's new year celebrations as it became one of the first countries to celebrate 2018, at 11am UK time.

In Auckland, revellers were treated to reggae music from local bands at a block party and in Rotorua, there is a free festival featuring local entertainment, fireworks and the hedline act Elemeno P. There are quite a few festivals happening across the country - but alcohol has been banned in many parts of New Zealand including Queenstown, Frankton, Arrowtown, Wanaka and Hawea.

This came into effect on Wednesday and will be in place until the 6th.

The alcohol bans are put in place to avoid disruption and danger, but the elements caused some chaos, with a south-westerley wind hitting the beaches and sending towels and umbrellas flying. Police were also forced to deal with escaped sheep.

Samoa became the first country to celebrate 2018 as midnight struck on the islands.

The most interesting thing about the New Year in Samoa is the fact that one can take an hour's flight to American Samoa, which is on the other side of the dateline, and celebrate the New Year twice, twelve hours later as it is one of the last places to hit midnight.

Read more at The Telegraph