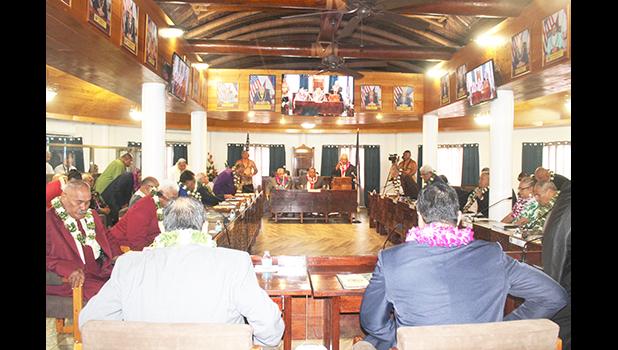 Pago Pago, AMERICAN SAMOA — In a unanimous 15-0 vote yesterday, senators approved in third and final reading during the Senate session a Senate bill, which would increase the salaries of the governor and lieutenant governor, despite a naysay from the acting governor,  as well as raise the office expense allowance for lawmakers. Both increases would be effective immediately upon passage by the Fono and approval of the governor.

Funding source for the legislation is the surplus of fiscal year 2020 from un-budgeted, unexpended and un-obligated revenues of ASG, according to language of the bill.

Justification of the proposed pay hikes, according to the bill’s preamble, is that in additionl to their regular duties and responsibility, COVID-19 has increased their workload exponentially from managing the coronavirus task force, to dealing on a daily basis with the US Federal Emergency Management Agency (FEMA), to dedicating more support for the ASG Medicaid Office, the Health Department and LBJ Medical Center.

The Senate bill seeks to increase the allowance for the Fono leaders to $60,000 each for the Senate President and House Speaker and hike to $45,000 allowances for Fono members.

Justification for the increases, according to the bill’s preamble, is that lawmakers have additional challenges to their duties and responsibilities as the new Fono building is under construction and they do not have any offices where they can conduct meetings.

Additionally, lawmakers must find spaces in their homes or meet at restaurants in order to conduct businesse “This arrangement necessitates additional expenses” for senators and faipule, the preamble states.

•           Sen. Togiola T.A. Tulafono, chair of the Senate Government Operations Committee, scheduled for Thursday a hearing on the Senate Joint Resolution, seeking to amend the Constitution to allow for year-long sitting of the Legislature instead of the current two-45 session days a year. It was introduced in the Senate last week.

•           Senate President Tuaolo Manaia Fruean said that as of yesterday, there are 10 more session-days left for the 2nd Regular Session and communication has already been submitted to the Governor’s Office on when and if, the Administration’s proposed $12 million supplemental will be transmitted for Fono review and consideration.

Tuaolo said that a decision on whether or not to take a short-mid session recess should be clear as soon as there’s a reply from the Governor’s Office.