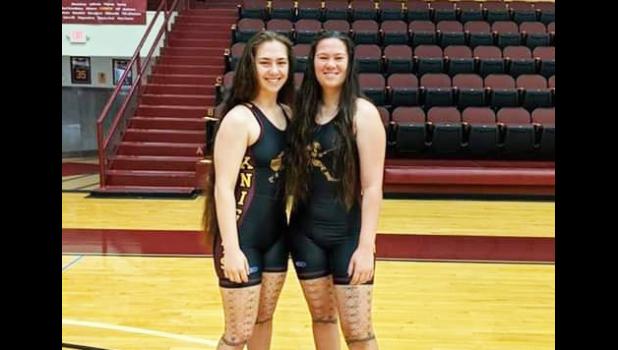 Erie, PENNSYLVANIA — Local athletic twins, Stephanie and Danielle Floor (seen in this recent photo) of Ili’ili, American Samoa are proving that the education they received at Leone High School has prepared them for college with Stephanie, the 2018 Valedictorian scoring a perfect 4.0 and Danielle scoring a 3.6.

The girls, who were born in the state of New York, are currently attending and wrestling for Gannon University at Erie, Pennsylvania. Gannon’s Women’s Wrestling Team is ranked 4th nationally.

Stephanie, a two time All-American Scholar Athlete has also received an increase in her wrestling scholarship based on her performance this past season, according to the university.

“I felt more comfortable this year after not wrestling back home these past few years and I look forward to training even harder this off season,” Stephanie said last week. “I am on a 3+2 program to get my masters in athletic training, a minor in psychology and education.”

Danielle, who is majoring in Mid Level Education with a minor in history, said “We are also employed by the school and will remain on campus throughout the summer break.”

She added, “We’ve just been informed that next year’s semester may be online with only athletes staying on campus, so we have to see what happens.”

Even though the twins attend college in the U.S. the girls have been able to still play beach handball in national and international tournaments over the last two years on the American Samoa handball team.  And they still plan to do so in future competitions.