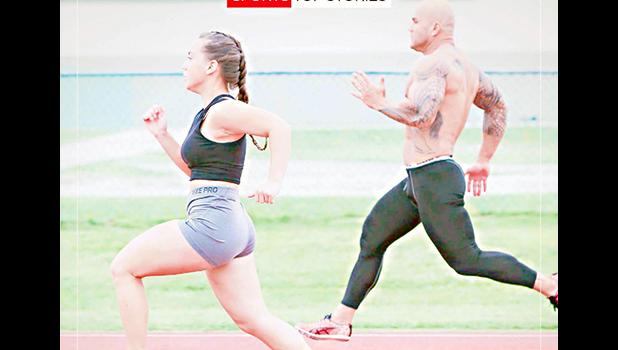 Twenty-four Pacific countries including American Samoa will take part in the upcoming games, which will features nine sports and the territory will have 3 athletes competing in two sports — track and field, and golf.

Samoa News was able to interview Mr. Iakopo and his daughter about their preparation for the upcoming Mini Games.

Mr. Iakopo, who now lives with his family in Saipan has been an athlete for all of his life. His daughter is also a sprinter for CNMI and Guam.

Hailing from the village of Nu’uuli, Mr. Iakopo explained that he got in contact with the American Samoa National Olympic Committee (ASNOC) about a team to represent American Samoa in the upcoming events. However, he was told that the territory would not compete due to COVID-19 restrictions and other reasons — including cost.

Sending a team to Saipan is pricy plus with the pandemic the different sports federations have been on lockdown unable to train or compete, so ASNOC decided not to send a team to Saipan.

“During our conversation with the president of ASNOC, Ed Imo, I suggested to them that since my family lives in Saipan and I and my daughter are active athletes, we can participate if they give us the chance to represent our country,” Mr. Iakopo explained.

He told Samoa News that they’ve been training for this event since last year and they’re continuing to train so that they can reach their goal.

Last month, Mr. Iakopo and his daughter traveled to American Samoa, not only to train here but for his daughter to meet the rest of his family and visit the island for the first time.

“My daughter wanted to come home to meet my families, visit the island and train here locally to make sure she has the blessings from the elders and especially from ASNOC before the games start,” Mr. Iakopo said.

“This is a great opportunity for us to represent our country and on behalf of my family, I would like to sincerely take this time to thank the ASNOC president, Ed Imo for allowing us this golden opportunity to represent American Samoa.”

“It’s a blessing to represent our country in the Pacific Mini Games. I’m very humble and honored for the opportunity. We go through a lot during our training. We have a lot of challenges but we thank God for giving us the strength and the power to do things in life. This is not an easy journey but without God we would not be able to do it,” Mr. Iakopo said.

Filomenaleonisa is also looking forward to competing at the PMG.

A sprinter for her high school in Saipan and a bodybuilder, Filomenaleonisa said that this will be her first time to compete at the international level in track and field events.

“I feel confident with my training and the assistance from by coach, my Dad and I believe in myself that I should not fear running against the top runners in the Pacific islands,” she said.

“I’ve learned a lot from my training and I’m looking forward to competing in Saipan in June of this year. I’m ready and I’m confident that I can get the result I want.”

According to Mr. Iakopo, he received information from ANOC that the third athlete, Ms. Chen is attending school in the States and will train there and she will join them in Saipan before the games start.

Mr. Iakopo and his daughter will be returning to Saipan this Thursday.

Stanley Iakopo (left) and his daughter Filomenaleonisa are two of the three athletes representing American Samoa in the upcoming Mini Games in Saipan in June of this year.  [photo by AF]

Before they leave American Samoa, Mr. Iakopo thanks everyone for their supports, love and their hospitality.

Special thanks to Vaito’a Hans Langkilde and his family in Pago Pago for hosting them. Also to the Sauia Bodybuilding & Fitness gym management and staff for allowing them to train at their gym free of charge.

A statement issued by the Pacific Games Council (PGC) last week stated that the PGC President Vidhya Lakhan and chief executive Andrew Minoque have conducted a final inspection of Saipan game facilities last week and have approved their preparation for holding the 2022 Pacific Mini Games.