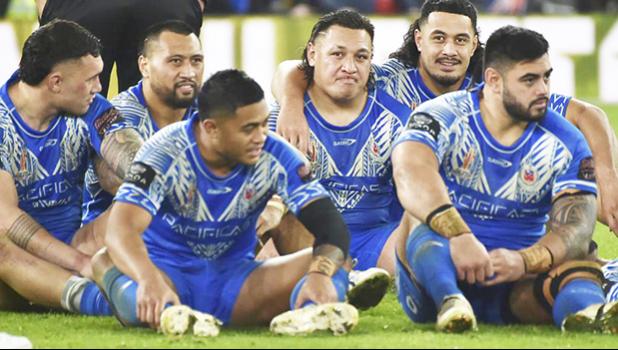 MANCHESTER, England (AP) — Australia upheld its domination of the Rugby League World Cup by putting away Samoa 30-10 in the final at Old Trafford on Saturday.

Captain James Tedesco and center Latrell Mitchell each scored two of Australia’s six tries to claim a 12th world crown out of a possible 16.

“Just the mark of a great footy team, committed to each other, and really happy for the boys,” Australia coach Mal Meninga said.

Samoa made history by becoming the first tier-two nation to reach the final, courtesy of a nail-biting semifinal win over England, and emerged with considerable credit without ever threatening to pull off another shock.

The Kangaroos had the patience and composure to deal with their opponents’ unorthodox play and showed their clinical and ruthless side on attack to boss the game. They ensured an Australia double after the Jillaroos’ 54-4 victory over New Zealand in the early women’s final.

Toa Samoa had the support of Prime Minister Afioga Fiame Naomi Mataafa, who flew in especially for the occasion, and the overwhelming majority of the crowd of 67,502.

But the ultra-professional Australians ignored the boos and gradually earned the begrudging praise of the English fans as they cruised to a third successive World Cup triumph.

The Kangaroos were battle-hardened from a hard-fought semifinal victory over New Zealand and little went right for the Toa in the first half.

They were hit by two tries in four minutes. Mitchell brushed off an attempted tackle by fullback Joseph Suaalii to open the scoring, and a searing break from dangerman Josh Addo-Carr created Tedesco’s first try, which was converted by Nathan Cleary.

Trailing 10-0, Samoa was still in the contest when Addo-Carr knocked down Stephen Crichton’s pass meant for winger Brian To’o and Chanel Harris-Tavita was held up over the line.

But there was effectively no way back when second-rower Liam Martin took hooker Harry Grant’s pass to force his way over for Australia’s third try after 29 minutes.

“The first half for us was exceptional,” Meninga said. “We did everything we needed to do and second half we scrambled well defensively, one man down and we scored some points while that happened.”

The sin-binning of second-rower Angus Crichton six minutes into the second half for a swinging arm that put Harris-Tavita out of the game encouraged the crowd to ramp up its support for Samoa but, even down to 12 men, the Kangaroos were too good on the counterattack.

A trademark ball steal by Cameron Munster got his side into prime position and Cleary got replacement back-rower Cameron Murray squeezing through a gap for their fourth try.

Cleary’s second goal made it 20-0 and the reigning champions had further tries from Grant and a returning Crichton ruled out by video referee Chris Kendall before the crowd finally got something tangible to cheer.

Mitchell left a big hole in the Australia defence when he went to intercept Jarome Luai’s pass and that gave To’o a straight run to the corner for Samoa’s first try.

Normal service was quickly resumed after man-of-the-match Tedesco sliced through the Samoa defense from Munster’s inside ball for his second try.

“James Tedesco was our everywhere man,” Meninga said. “He led the side really well through the week, his talk and the way he trained was exceptional. He was on tonight and we needed him.”