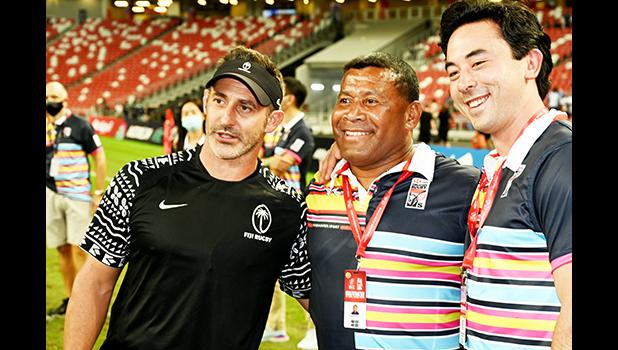 Onboard for only 3 months, former England 7s great now Fiji head 7s coach, Ben Gollings, has fostered a favorable environment to allow Fiji to get back in the groove to championship form.  Gollings has helped his team overcome the disappointment of the pandemic locking them out of the HSBC 7s series, and kept their spirits as they proved their resilience in winning the Singapore 7s after a shaky first few games.

Ben Gollings is a proven winner as a player, and is engaging with sincerity, integrity and a pleasant calm demeanor.  With background stints as Sri Lanka head coach, Canada and Singapore (assistant), Coach Gollings has made the transition in becoming not only a solid head coach, but by the reaction of the Fiji Team’s post Cup victory podium embrace, Ben is now revered as a players coach.  To any of you not involved in high level team sports this equates to where a team will play and die for a coach.  Players will play hurt, through personal problems, through organizational nonsense, through travel disruptions, cyclones and bad food.

Fiji is in good hands.  Coach Ben Gollings also seems to care about Pacific Teams as one family.  The key now is for me to check my archives of shooting Coach Gollings as a player back in the day for England.  Did he play in the 1994 Hong Kong 7s when Cool Stuff shot Jonah Lomu’s debut?

Barry Markowitz: How does it feel Coach?

Coach Ben Gollings: "It’s brilliant. The players are fantastic, its a great start.  We will keep this going”

Markowitz: We have all had to suffer emotionally as well as being deprived of travel because of the pandemic… does this do a lot of healing for not only your team but for the People of Fiji?

Gollings: "Yeah I think in general, the world has suffered a loss… and we can be back here now, playing a game we love, particularly the players… they give their heart and soul into this… I know it goes a long way toward a boost back home in Fiji"

Markowitz: "It seemed like in the beginning you guys were stumbling and then you got it together.  Is it just rust from all that down time of not really competing?"

Gollings: "First game, big occasion, a lot of new players… a credit to Ireland.  They played a game that we, couldn’t play our game.  I think the great thing is that we bounced back.  And proof that 7s is a game of resilience.  We went from strength to strength after that.  The players really applied themselves after that.:"

Markowitz: The Pacific Islanders rock in the series!

Gollings: "It’s fun to be back in the series”

Just like back in the old Manu Samoa 1991 World Cup 15 days of  Peter Fatialofa, Brian Lima, To’o Vaega, Pat Lam, Frank Bunce, Stephen Bachop and Head Coach Bryan Williams… you remember, we were all, especially in Samoa, devastated by Cyclone Ofa (and then Cyclone Val).  Manu Samoa restored our spirits in the same way Fiji 7s is bolstering the pride of all our Pacific Nations.

Go Fiji Go!  That is until our maturing 2022 version of Manu Samoa, who is looking increasingly solid, becomes the dark horse Cup 7s Champions… which could be as soon as this weekend at the Vancouver 7s.  Go Manu Go!