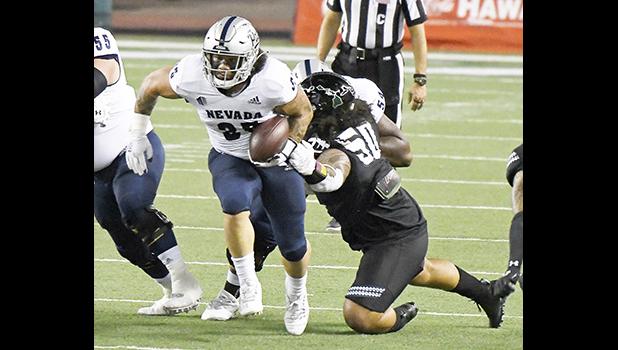 Honolulu, HAWAII — The spirit of Mosiula Faasuka Tatupu visited Cool Stuff at Aloha Stadium Sunday last week in the form of Toa Taua. Toa runs hard and low just like Mosi, and seemed amazingly resilient at only 5’ 9”. Affectionately I bestow upon Toa the nickname, “Mini Tatupu”. Toa seems to have Mosi’s work ethic embedded in his DNA.  Toa is #35, Mosi was #36 at USC.

In these difficult times I needed a spiritual pat on the shoulder from Mosi even in the form of Toa's running style. Mosi was consistent, always kept his cool, and could always be counted on to gain a minimum of 5.7 yards on every play.  USC never needed to pass the ball, heck, just give it to Mosi twice and you have a first down.

As a UCLA Bruin Outside Linebacker, Cool Stuff spent the week prior to the 1974 UCLA vs USC Rivalry, prepping for Mosi as he was fearsome, even as a freshman, at executing the “J Block” (kicking out we Outside Linebackers, so Tailback Anthony Davis could run past and laugh at us on our back).  Mosi was a regular blue-collar guy with the guys. In reality, Mosi was extremely intellectual and sought out folks away from the sports world to learn and expand his world view outside of Fagasa and Hawaii.

I have never met Toa Taua, I don’t know his family’s villages, but I hope his family sends him this column to inspire him to follow in Mosi’s path, to help young athletes, and be a good Uce to those he engages in sports and life.

The University of Nevada Reno shared Toa's background on their official website:

"Son of Faletui and Taua Taua … Has three brothers, Vai, Pati and Ainuu, and two sisters, Lagi and Tasi … His brother Vai, played football at Nevada and in the NFL and is currently a member of the Nevada coaching staff … His other brother, Ainuu, plays football at UCLA … General studies major … Chose Nevada because it will benefit him 40 years from now … Also recruited by Iowa State, San Diego State and Utah State … Lists Junior Seau as his sports hero … Enjoys hanging out with his family and friends in his free time.”

Another good Uce who deserves recognition for his professional journalism and community work is Samoa News’ Tony Gasu. Tony has stepped up his game this year providing great images for Samoa News and the world to see.  Imagine Tony’s work (written and photos) being one of the few glimpses college coaches may get to tip them off to a young American Samoan that might deserve a college athletic scholarship.

The Territory was one of the few places where contact sports was allowed. Cool Stuff enjoyed the pages full of local talent. For families, the Samoa News covering their kids, is a precious memento to share amongst relatives and to serve as a guide to the younger kids to be disciplined in both academics and training for their dreams.