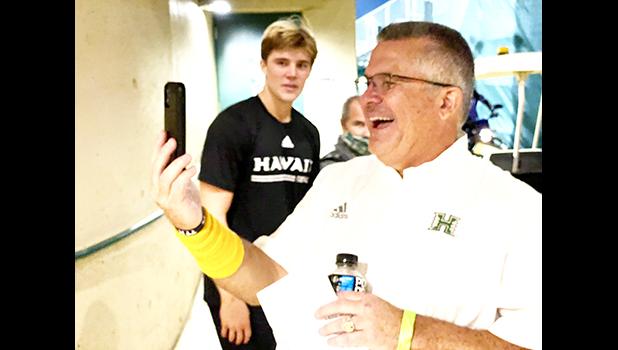 Honolulu, HAWAII — It is a tradition for University of Hawaii Football coaches to harvest the rich talents of American Samoa, New Zealand and Australia.

As a father who has seen the integrity and lack of it at the highest collegiate level, it will truly be a blessing for South Pacific student athletes and parents to spend time with University of Hawaii's Head Coach Todd Graham.

Saturday, Cool Stuff, witnessed two touching personal moments that lead one to embrace Todd Graham as more than a coach...maybe as fa'a Aiga.

Pregame, after warmups, I watched UH's starting QB, Chevan Cordeiro, receive consoling words from Head Coach Graham to relieve the pain of relinquishing his status due to a previous game injury.

Chevan knew the deal, he was hurt and wouldn't play QB.  But Coach Graham, knowing the psychology of a true competitor took the time to ease the pain by boosting Chevan's spirits.

Observing the post game Facetime conversation between QB Shager, his Mom and Coach Todd Graham I saw a genuine sense of family... overcoming distance, Covid-19 ban of fans and even relatives from the UH Rainbow Warriors historic victory. It was an accidental warm and fuzzy cherished moment to be an up close witness.

If Coach Todd Graham is able to make a formal recruiting visit to American Samoa, it would be ok to invite him to church, or at the least, meet your Faifeau.  After the San Jose State football game I saw Coach Graham lead a team prayer. The players were all in.

Cool Stuff loves football, but cares significantly more about American Samoan youngsters getting a scholarship education at a quality university, like University of Hawaii.

Sorry if I am not sold on the pursuit of NFL dreams... if that happens, it happens.  The value to the Territory and your family is your kids’ education.  It is a bizarre world outside American Samoa's borders these days... which will increasingly negatively affect you.

Input from your educated kids, who are more tech or business savvy, may help navigate the current challenges we will continue to endure.

Congrats to Coach Todd Graham, his staff, team and American Samoans players on a courageous victory.  Hawaii and the South Pacific folks hope this is the catalyst for success and future opportunities for our youth.