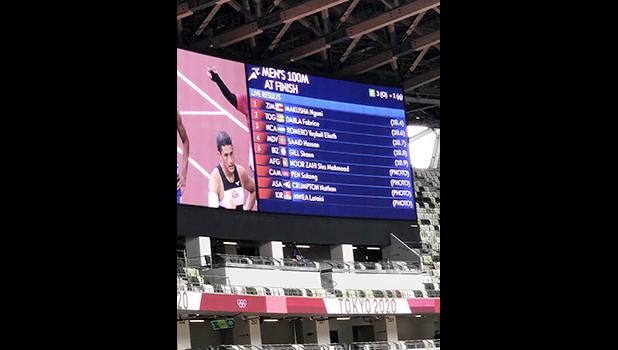 Pago Pago, AMERICAN SAMOA — A news release by American Samoa National Olympic Committee (ASNOC) from Tokyo announced that American Samoa sprinter Nathan Ikon Crumpton ran a time of 11.27 in the 100 meter sprint. This was a personal best for Crumpton at an IAAF certified race and the second fastest 100 meter time run by an American Samoan athlete at an Olympic Games. Unfortunately, Crumpton didn’t go through to the next round of races.

“The race was one heck of an experience.” said Crumpton afterwards. “The result was a little underwhelming, but I'm not beating myself up over it. This isn't my main sport and it's all about the experience. And to compete in a marquee Olympic event with so much history and fanfare behind it is a dream come true.”

“I’m going to take a day or two to relax, then it's back to a full plate of work,” said Crumpton. “I've got to finish this book I've been working on and finally get it to market, and I've got to start planning for the winter skeleton season. I'm due in Beijing in October and then a full season of racing to try and qualify for the Winter Games by January 16th. Busy times ahead!”

Crumpton’s book, “Alpha Status: A Non-fiction Novel” will be released in the coming few months.