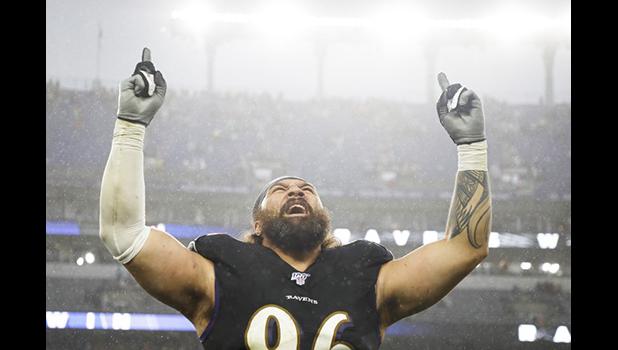 Calabasas, CALIFORNIA — For Domata Peko, the road to the Super Bowl runs through Calabasas.

The Baltimore Ravens defensive tackle, signed a month ago by the NFL’s hottest team, was an assistant coach this season at Calabasas High as he waited to see where his pro career would take him next.

“I loved my time there,” said the 6-foot-3, 325-pound Peko, 35, whose first name is pronounced DOME-atah. “Helped me stay in shape and keep my tools sharpened, and to stay ready.”

There’s more to it than that. His son, Domata Jr., is a freshman defensive end at Calabasas, and the elder Peko was one of several former NFL players on the coaching staff, along with head coach Chris Claiborne, and assistants Curtis Conway, Travis Hannah and Eric King.

It’s awesome, man, to see him in that situation because you know the personal side of him,” said Claiborne, a former USC linebacker who spent eight years in the NFL. “[The Ravens] look like they’re having so much fun. It’s one thing to be back in the league. It’s another to be on a team that’s having a good time and competing at a high level.”

Peko, signed Nov. 12, is part of a constant three-man rotation at defensive tackle, and has started two of his three games. It’s a plum assignment for a 13-year veteran who never won a playoff game in 11 seasons with the Cincinnati Bengals and two with the Denver Broncos.

Peko is easy to spot on the field, with his spray of dark hair spilling out the back of his helmet and covering the name across his shoulders. When he was younger, learning the game on the dirt fields of Pago Pago in American Samoa, he had a different distinguishing characteristic.

“I played for the Samoana [High] Sharks, and the whole team was blue,” he said. “Everybody had a blue helmet. I had a red one because it was the only helmet that would fit me. We used slippers as thigh pads and knee pads. It was bad, man. But it really helped me to toughen up and appreciate all the good stuff we have here in the U.S. Just helped me connect to my culture and my roots, know where I came from, and I just appreciate what I have now.”