Floor twins continuing sports and their educations off island 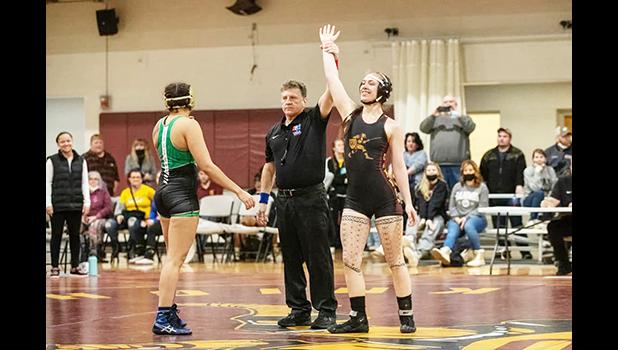 Pago Pago, AMERICAN SAMOA — American Samoa’s 2018 Youth Olympian Handballer and captain Stephanie Floor has finished the 2022 wrestling season on a high note.   Wrestling for Gannon University at Erie Pennsylvania, Floor completed the season with a winning record of 22 wins against 12 losses. She registered 8 pins and 8 tech falls for the season along with a 5-1 dual meet record making her one of the team’s highest scorers.

She was also presented with the coaches award, which encompasses multiple awards, such as the Iron Woman Award (someone who has fought through injuries), the Most Dedicated (someone who shows up to practice and puts in the most work), the MVP award, and she was the most improved wrestler for the fourth straight year. In addition, Floor won another All American Scholar Athlete award for ending her semester with a 3.9, 4 years in a row.  Because of her academic and athletic achievements Floor was inducted into the Gannon University chapter of Chi Alpha Sigma.

This year however, the girls were promoted to Operations Specialist now managing a team of 15 students. The twins will be graduating with their BAs — Danielle in secondary education and Stephanie in sports and exercise science/ sports medicine. Stephanie just started graduate school and is currently on track to graduate in the spring of 2024 with her Masters in Athletic Training and a minor in psychology.

Having no opportunity to wrestle for American Samoa and wanting to continue wrestling, Stephanie registered with USA Wrestling and completed her season by wrestling at the 2022 USMC U23 Women’s Wrestling Nationals at Fort Worth, Texas this past weekend in hopes of making the USA U23 Women’s National Team. Unfortunately she fell short of her goal after losing her first match against eventual bronze medalist V. Torres, before securing a first period win by pin over I. Worthing before dropping her second and final match against J. McBryde.

“She does well considering how many years of wrestling she missed while she lived here in American Samoa,” said CJ. Sagapolutele Floor, her dad and coach. He added, “We moved here to take care of my mom and build upon our success as a wrestling family and share our knowledge.

“My son CJ qualified American Samoa for the 2012 London Olympics however the American Samoa Armature Wrestling president named his wife head wrestling coach which subsequently forced my son to decline Olympic participation and as we were forced to find another sport, we still found success winning medals, an Oceania Championship and earning a spot for American Samoa at the 2018 Youth Olympics in handball.

“It actually worked out well because with handball being a team sport we were able to share this experience with our local athletes who really let the world know who American Samoa is with their success. Even better is Stephanie still gets to pursue her wrestling goals, stay in great shape for handball and perfect her wrestling skills with some of the most qualified wrestling coaches in all of America.”

Next up for the Floor twins is competing at the USA SoCal Cup in Beach Handball at Huntington Beach, California August 27 and 28.

ASHA is continuing to build upon the success of the girls program by trying to include as many as five U18 girls to train and play with the senior women’s team.

Making the team are Chantel Su, Star Chan, Memory Viliamu, Amelie Chen, Tia Cummings and Charlotte Taupaki. Due to an assortment of factors, such as parental support, school obligations or the cost of bringing players from Pago Pago, not every chosen player will actually make this National roster.

Floor said, “We have requested and are hoping to be awarded some financial assistance with bringing our Youth and Junior players to California, however as the days pass it appears highly unlikely that the ASNOC financial officer Don Fuimaono, who is in charge of financial allocations to assist National Federations will approve, leaving us with a deficit and hurting the development of our young rising stars.

“I have a very strong core of experienced women however due to COVID we haven’t gained any game experience in over two years stalling our progress.  With a majority of my team residing in the USA attending college, competing in any USA Handball Tournament becomes more affordable.”

“These women have 2028 Olympic aspirations as do I, so it’s important to continue to facilitate any opportunity to gain game experience while I find additional young talent.

“The SoCal Cup offers a great mix of elite beach handball and some less experienced club teams making it the perfect competition to attend. I have some USA players and coaches assisting with our camp so I also get to learn a few new tricks,” said Floor.

ASHA has partnered with the American Samoa Dept. of Education (ASDOE ) Athletic Director Clayton Mahuka to find ways to build upon the success of handball.  A free handball summer camp at Lupelele Elementary School with the full support of Principal Mrs. Julie Meleisea is proposed and awaiting ASDOE approval.

ASHA will be recruiting boys between the ages of 13 and 21 to compete in the 2022 Oceania Youth Boy’s Handball Championships in November at Cook Islands. This marks the first time a boy’s indoor handball tournament will compete in Oceania since 2014.

Boys 21 and under who wish to try out for the 2022 National Handball Team can contact ASHA at 272-1735 or e-mail asteamhandball@gmail.com or check the ASHA Face book page for details on tryouts and training.

“We have some very talented boys. Jason Bai, Maea Loe and Frank Pritchard are very skilled players and there are many more. We can medal,  however it’s up to the parents support and the boy’s commitment and desire to win that will dictate the outcome,” said Floor.

Additionally Park and Recreation Director Kenneth Tupua has informed ASHA that the new beach court at Lions Park will be built to Beach Handball specifications. The multi use court can host one beach handball game or two beach volleyball games, which opens the door to host Oceania Championships in the future and local leagues.

Floor added, “We are grateful to be considered and thankful to everyone involved in providing ASHA with this great opportunity.

“We will seize the opportunity to develop beach handball even further now that an official court will be built.

“Things are moving forward,” he enthused.