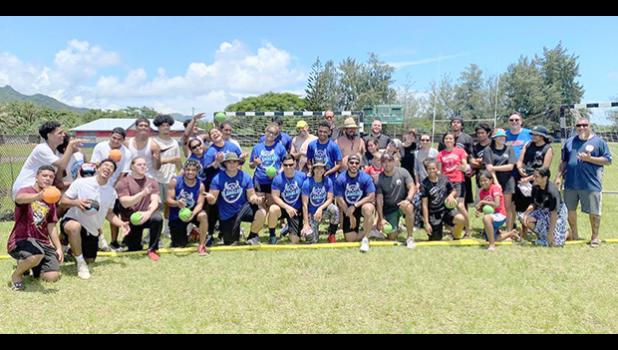 Four teams took advantage of a beautiful day to enjoy a familiar sport and everyone brought their A game as the competition was tough — the throws, hits and catches were exciting and it was evident that everyone, including the spectators were having fun.

Olamalosi won their first round game against the Fagatogo Fish Market Mud Sharks winning both halves to earn their birth in the finals. The game featured some amazing throws by both teams which excited the crowd of spectators.

The first game featured a mix of members from the National Youth and Junior Handball Teams playing as Sapa Suey against the Undefeated Champions who easily overpowered the youngsters in two straight halves.  Sapa Suey then played the Fagatogo Fish Market Mud Sharks to a 2 -2 tie forcing a 1 game overtime.  After a series of back and forth hits Sapa Suey eliminated The Mud Sharks.

“When we heard about the dodgeball tournament we thought it would be fun to try something new. When it was mentioned that there might be an opportunity to represent American Samoa in future competitions throughout the Pacific it only further peaked our interests. We all had a great time with such a fun way to incorporate exercise and look forward to more upcoming tournaments,” said Sam Logoai of the Undefeated Champions.

Dodgeball is an international sport governed by the World Dodgeball Federation with over 150 member federations globally. It is played on a court 60ft by 30ft divided by a center line.

Six court players per team try to eliminate their opponent by throwing a ball slightly bigger than a handball at their opponent. A strike eliminates the player hit.  A catch eliminates the thrower while also brings in a player who was previously out.  Each team also has three ball chasers who strategically feed thrown balls which are retrieved from off the court.

A winner is determined when all six players have been eliminated.  There are two 20 minute halves and no limit to how many games are played in each half. The team with the highest amount of wins per half wins the half.  The second half begins a zero and in the case of a tie, a sudden death game determines the winner.

DAAS would like to thank our sponsors South Seas Broadcasting and CaBoom Athletic Club.

Beginning Wednesday, Jan. 6, 2021, and every Wednesday after at 4pm DAAS will be hosting dodgeball games for anyone who wishes to play at Veterans Memorial Stadium.  There is no cost to play and everyone is invited.

DAAS is searching for an indoor facility and once it is found a league will be created.  In addition interested players will have an opportunity to represent American Samoa in international competition once the COVID-19 restrictions are lifted. Anyone interested can call Coach CJ at 272-1735 or e-mail Samoandude@me.com for information.

“ I am always searching for opportunities for our local athletes. We have natural talent and athleticism here.  All our athletes need is direction and a coach who cares, that’s what I provide. I have no doubt that there are gold medals in our future.  Just as I do with handball, only residents of American Samoa will be considered for National Team representation as I believe in our athletes and my ability to coach them,” said Floor.