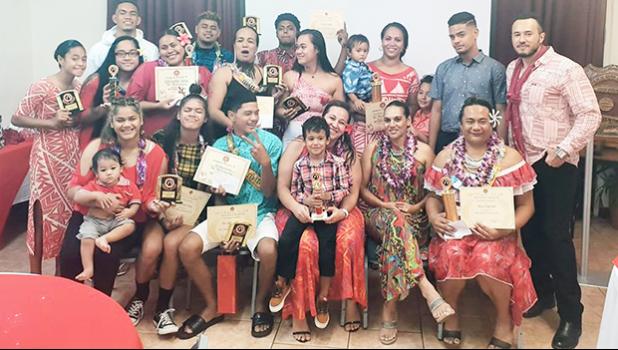 Pago Pago, AMERICAN SAMOA — This past Saturday, January 4, 2020, supporters and members of Niu Netball Club enjoyed a night of laughter and fun at the Naumati Room, Tradewinds Hotel during the club’s first annual prize giving and awards ceremony. (A gift exchange for the holidays was also part of the agenda).

Niu Netball is under the leadership of club president Baron Thomsen and officials that include Tracy Fuimaono, Tasi Tuvaifale, and Ipi Ieli. Representing the American Samoa Netball Association at the “Fire and Ice” event was Dr. Fiona who spoke briefly about the short history of Niu Netball Club.

Two boys of Niu Netball Club during a sing-off, which was one of the many games played during the club’s first annual prize giving and awards ceremony held this past Saturday at Tradewinds Hotel. [photo: Blue Chen]

According to her, less than a year ago, Niu Netball VP Tasi had come in to pay the registration fee for the club but they lacked players. “So he was standing there trying to recruit people to fill their roster,” Dr. Traill reminisced. The club was formed last summer and sponsored by Basel Ake and Niu Construction. Since then, it has grown to include over two dozen members. The team participated in the SCOPA tournament in Samoa this past November and placed an impressive 4th overall out of 21 teams.

Pictured are some of the recipients of the “Special Awards”: