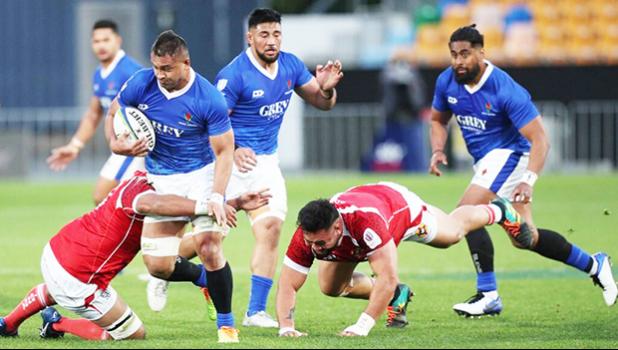 Taefu, who plays for the Perth-based Western Force in Super Rugby Australia, kicked two penalties to give Samoa a 6-3 lead at the end of a physical first half.

The match came to life in the second half with six tries — five to Samoa — including a run of four tries in a frenetic spell between the 45th and 55th minutes.

The teams meet again in Hamilton, New Zealand next weekend and the team that has the best aggregate record after that match will qualify for the 2023 World Cup in France, slotting into Pool D with England, Japan, Argentina and a yet-to-be-determined qualifier from the Americas.

The loser will face the Cook Islands on July 24 in a repechage which will determine the last team to qualify for the World Cup from the Oceania region.

“The match was exactly what we expected it to be,” Samoa captain Michael Alaalatoa said. “Obviously it was very tight in the first half. The Tonga boys, they came out firing and were really physical.

“We expected nothing less in a Samoa versus Tonga match. But we stuck to our game plan and towards the back end of that second half we started to get some points.”

Tonga came into Saturday’s match after losing 102-0 to the All Blacks last weekend, slightly strengthened by some late arrivals. Samoa lost two matches to the New Zealand Maori over the last two weekends and had a more settled preparation.

But Tonga took the match to Samoa in the first half, playing a physical style and sharing possession and territory. Small things — a poorly-performing lineout and key turnovers at breakdowns — began to tell against them as Samoa lifted its tempo in the second half.

“In the first half we created a lot of opportunities but didn’t finish them with the ball in hand,” Alaalatoa said. “We were a bit more clinical in the second half, playing territory and putting the ball behind them. That paid off for us today but we’re expecting the Tonga boys to bounce back next week.”