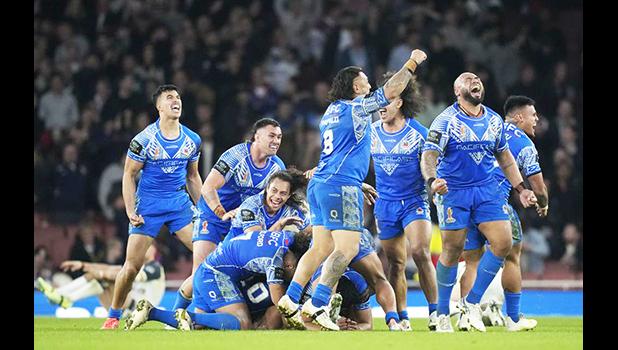 LONDON (AP) — Samoa pulled off one of the great sporting comebacks to knock out England from its own Rugby League World Cup on Saturday and earn a final showdown with Australia.

Four weeks after being humiliated 60-6 by England in the tournament opener in Newcastle, the Samoans turned the table in dramatic fashion with a golden point 27-26 semifinal victory at Arsenal’s Emirates Stadium.

Center Stephen Crichton was the match winner, kicking a 40-meter drop goal in the fourth minute of extra time, to add to his two tries and three conversions.

England saved its worst 40-minute performance for the semifinal but emerged from its slumber to rally from 20-12 down and twice draw level in a breathless second half before being pipped at the death.

The game lacked the quality of the first semifinal between Australia and New Zealand on Friday but it made up for it with sheer excitement and drama as Samoa, making its first appearance in a World Cup semifinal, revelled in the role of underdog.

It played the more attractive rugby while England was strangely tentative from the start despite being given a helping hand.

Samoa fullback Joseph Suaali’i and standoff Anthony Milford kicked out on the full to fritter away possession and skipper Junior Paulo was sin-binned for a tip tackle on Tom Burgess after 12 minutes.

Samoa was 4-0 up by then after center Tim Lafai slipped Kallum Watkins to score.

The visitors suffered a blow when hooker Fa’amanu Brown, playing in place of an unavailable Danny Levi, was knocked out in a clash of heads with teammate Oregon Kaufusi. They had a let-off when England captain Sam Tomkins got Watkins through a gap only to lose his grip on the ball in Lafai’s last-ditch tackle.

England finally broke through when second-rower Elliott Whitehead supported a half-break by standoff George Williams to score their first try.

Tommy Makinson’s goal made it 6-4 but Samoa went back in front 10 minutes before halftime when second-rower Ligi Sao caught England’s defense napping to go over from dummy half. Crichton converted for 10-6.

England received a dose of luck in the new half when Lafai had the ball jolted from his grasp by Watkins and second-rower John Bateman was gifted the easiest of tries.

Makinson’s second goal nudged England in front but the lead lasted three minutes. Luai took a return pass from Paulo to get Crichton through a gaping hole wide out for Samoa’s third try, to which Crichton added his second goal.

After an England knock-on 10 meters from its tryline, Milford and Luai combined to get Lafai over for his second try in the 56th and extend the lead to 20-12.

Herbie Farnworth bustled past four defenders to score England’s third try and Makinson leveled the score after 67 minutes with a penalty.

England had all the momentum and was mounting a promising attack when Crichton picked off a pass from Victor Radley meant for Whitehead and sprinted 60 meters for his second try.

Crichton’s third goal gave Samoa a six-point lead but England struck back through Farnworth, who went 70 meters for his second try to finish off a break by Williams. Makinson kept his nerve to tie the score again.

Whitehead charged down Milford’s drop-goal attempt in the second minute of extra time but when England was pulled up for a forward pass inside its half, Crichton nailed the chance from 40 metres out.

The final is next Saturday at Old Trafford.