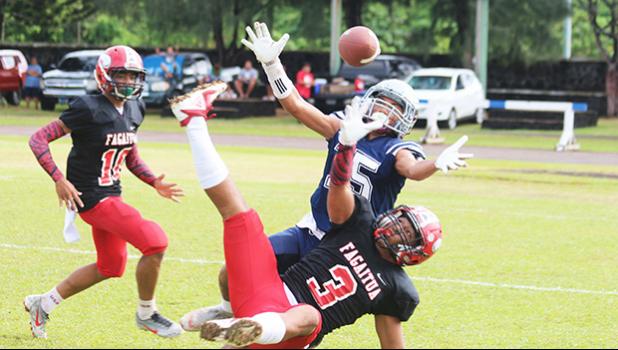 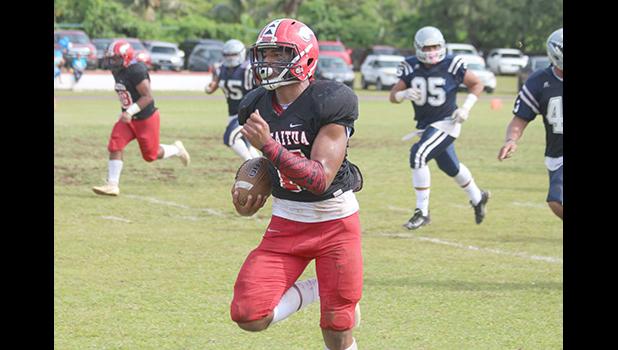 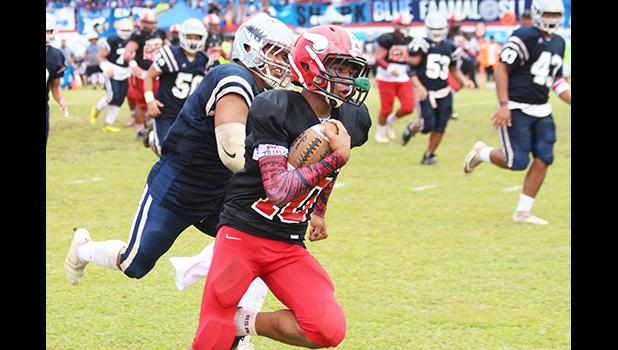 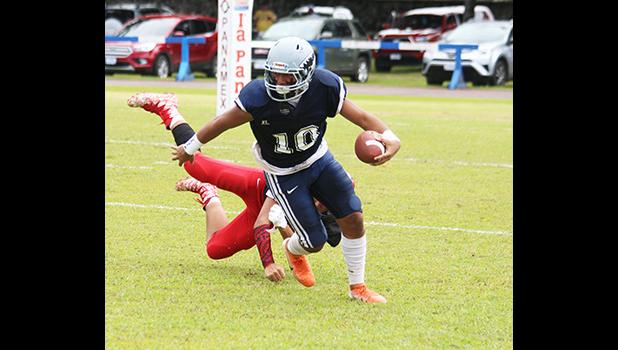 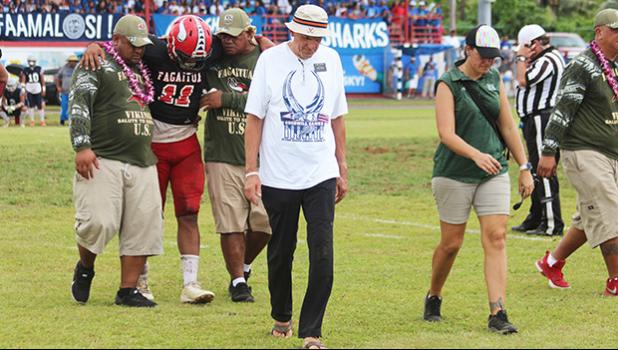 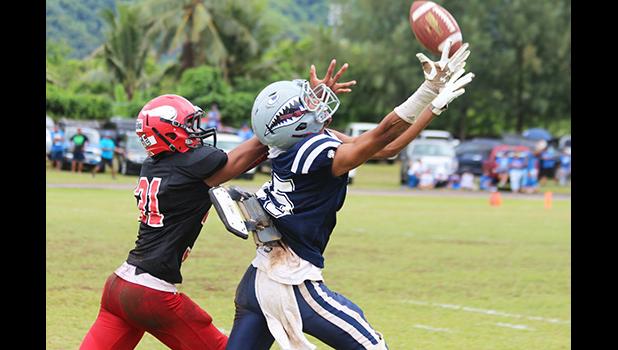 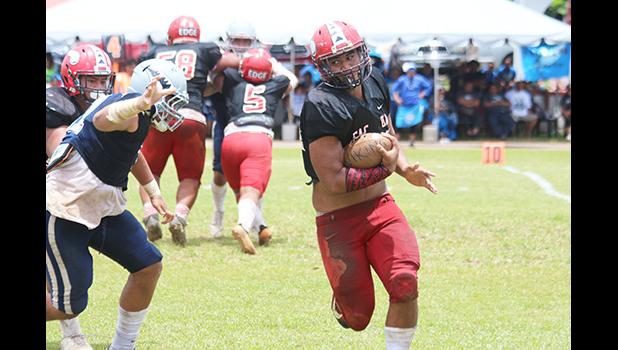 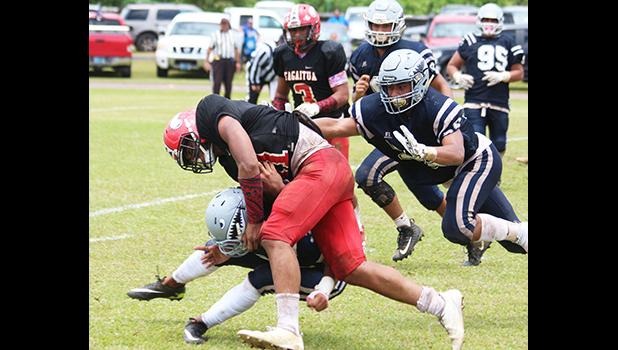 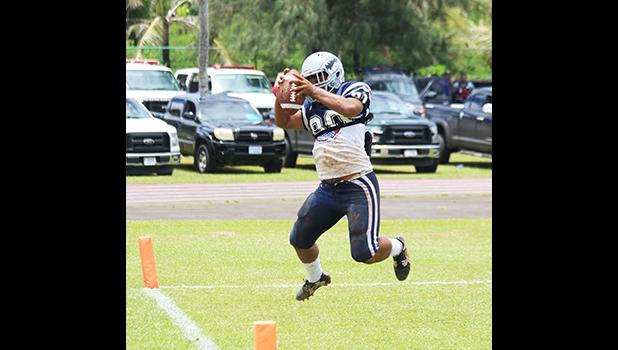 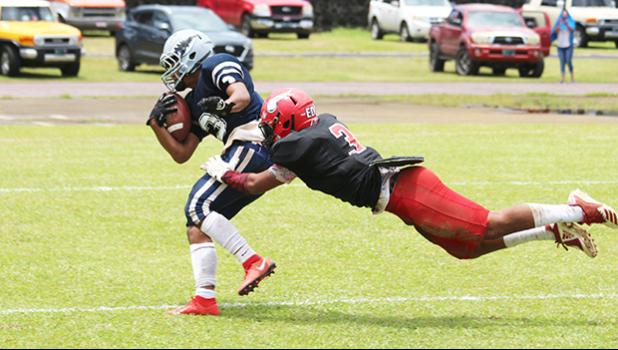 By far — the toughest game of the season
By
Tony Gasu
tony@samoanews.com

Pago Pago, AMERICAN SAMOA — The Blue Empire — Samoana High School — has claimed ASHSAA’s Varsity Football Championship Title, in two of the last three years, as Head Coach Pati Pati and his mighty Samoana Sharks fought to the very last second against the Big Red Machine — Head Coach Sua’ese Pooch Ta’ase and his Faga’itua Vikings. This was by far the toughest – yet best game of the season this year that went down to the wire, as these two powerhouses kept the score close, never losing sight of the possible victory, that is: ‘bragging rights’ for the year.

Leading up to the match, most people determined that the Samoana Sharks would come out throwing the ball, and annihilate the Vikings with their deadly ‘Air Attack’, but they had other plans in mind – The Vikings on the other hand stuck with what they did best throughout the season, and that was to run the ball in the ground attack, and just break through Samoana’s defensive hold right up the middle for a hopeful gain and more.

The Sharks who opted to receive the opening kick-off of the game started their first offensive possession quite differently from their usual plan, as Offensive Coordinator Keith Leuta wanted to play it safe and test the Vikings defensive hold with the running game, and indeed Faga’itua lived up to their ground containment defense.

The Vikings didn’t hesitate to start stacking players within the line of scrimmage as they opened up their offensive possession with the ground game, but Samoana was ready, as the Sharks heavy defensive coverage prepared for an all out pursuit to stop Faga’itua’s running game.

It was nearly a scoreless first quarter – But the Sharks drew first blood late in the opening quarter of the match, 3:17 remaining, and Viliamu Tanielu led the Sharks into Vikings territory with some huge carries though the Vikings defense to spot Samoana a first down at the 20-yard line. From there, Tanielu decided to motion Kobe Lefiti towards centerfield and called for the snap as he sent Lefiti with the jet-sweep play out to the sidelines and into the end zone for the first touchdown of the game, a 20-yard reception.

Their two point attempt was Tanielu pulling out the ball from Lefiti’s possession and lobbing it to the corner of the end zone to find Samson Leulu Tupuola for a successful attempt: the Sharks led the match with 8 points.

Vikings reply: They receive the kick-off from the Sharks, Faga’itua’s second down from their own 25-yard line, and the Vikings ‘All-Purpose’ player, Manuita Sofeni breaks through the middle of Samoana’s defensive coverage, bounces out to the sidelines and is gone with the wind as Sofeni storms downfield to record a 75-yard touchdown reception with just 2:46 remaining in the first quarter.

It’s Sofeni rolling out with the play action pass to find Scott Pese inside the end zone, bringing the two point attempt home to tie up the ball game at 8 apiece going into halftime.

Early in the third quarter, just after the Vikings received the opening kick-off to open up the second half, Faga’itua decided to switch gears and started off the second half with the passing game – 9:45 into the third quarter and Sofeni again tricks the Sharks defensive pursuit, as he attempted to run with the ball, but halted just before the line of scrimmage and lobbed a pass to Pese at centerfield to score a 20-yard touchdown reception, and now lead the match 14 - 8.

Samoana answers back giving the Vikings a taste of their own medicine. A vicious ground attack by Samoana kept the Vikings at bay, as Tanielu led the Sharks to the 25-yard line for a first down situation. From there, Tanielu’s running game lured in Faga’itua’s defensive coverage to stop the run, just in time for them to go to the passing game when Tanielu drops back to fire a bullet pass through the middle to find Allen Seagai for a 25-yard touchdown reception for the Sharks. With just 5:53 remaining in the third quarter, the match is all tied up at 14-14.

Faga’itua turns to the running game again, and was counting on it to lure Samoana’s defensive coverage downfield to try and contain the run. The Sharks annoyed with Faga’itua continuously gaining yardage on the ground, decide to send in the blitz – just in time for the Vikings to utilize the screen play.

Faga’itua’s third down reception from the 30-yard line, and Fitu Amata lobbed a perfect screen play pass to Pese, who caught that pass behind his blockers, and danced his way through defender to take this one all the way to the end zone for another Vikings touchdown.

Samoana — now cautious of the pass, was disappointed seing Joseph Umu pounding his way straight up the middle to cross the goal line and put up two more points for the Vikings during the extra point conversion. Faga’itua led the match 20- 14 with just 4:12 remaining in the third quarter.

But hold everything, Samoana wasn’t about to let Faga’itua off that easily – the Vikings sent the kick-off over to the Sharks after that touchdown reception, seeing Samoana’s Toeaso Sola receiving and returning that kick off out to the sidelines and out to open field as Sola literally burned out Faga’itua’s special team and returned the kick downfield for an 89-yard touchdown reception. It was the first kick-off return for a touchdown this season.

Their two point conversion had Tanielu sweeping the ball out to Lefiti in what looked to be a running play, but the Vikings were in shock when they saw Lefiti jogging towards the sidelines and setting up to pass on the halfback pass play to connect with Avory Seumanutafa to convert the two point attempt and tie up the game 22 - 22 with just 3:59 remaining in the third quarter.

The Vikings who were now desperate to escape with the lead in the final quarter of the match, were set up for a field goal from the 25-yard line. After the kick, Samoana was penalized 15-yards for roughing the kicker, setting up the Vikings at the 10-yard line. From there, Joseph Umu muscled his way straight up the middle and through Samoana’s defensive coverage to put Faga’itua in the lead again with another Vikings touchdown with just 6:38 remaining in the fourth quarter – Faga’itua led the game 28 - 22.

Samoana answered back, this time finally going to their ‘Air Attack’. After a good couple of passes to Lefiti, it spotted Samoana an opportunity from the 20-yard line. From there, Tanielu looked downfield to try and find an open receiver, and at the same time, he was opening up Faga’itua’s defensive coverage to cover the passing game – when Tanielu saw the centerfield was wide open he decided to tuck and run with it right up the middle to score a Samoana touchdown – tying the game up again at 28 - 28 with just 2:16 remaining in the ball game.

Overtime regulation state that both teams will get an opportunity to start their offensive possession from the 10-yard line. Both teams will also have 4 downs to play. The clock will not be used in overtime, as the winning favor will go to whichever team scores the most points within an offensive series.

Faga’itua’s first three plays of their first offensive series were all stuffed up behind the line of scrimmage, as Mazaichi Aviu, Daniel McMoore, and Tillis Sala led out a vicious Samoana defense to halt the Vikings running game to deny them from the end zone. Just when the Sharks were on fire to try and stop the Vikings final play of the series, Faga’itua’s Mika Tavai decided to show off his Viking power and muscled his way to the end zone, breaking tackles on the reverse hand off play and scoring for the Vikings in this two yard reception as they led in overtime 34 - 28.

Their two-point attempt was an all out blitz by the Sharks defense to stop Sofeni just shy of the goal line and deny the Vikings their two points.

Samoana’s first two plays were clogged up by a solid Faga’itua defense, which stormed the backfield and tackled Tanielu for huge losses within the first two plays.

Samoana’s third down from the 15-yard line, and Tanielu rolled out and quickly threw a bullet pass to connect with King Moe near the corner of the end zone to score for Samoana in overtime, as they came back and tied up the ball game 34 - 34.

Their two point attempt was a simple pitch play out to Lefiti, as Lefiti used his speed and outran Faga’itua defenders to the end zone and scored the winning two points of the game to officially bring this year’s ASHSAA Football Season to a close, and crown the Blue Empire as the 2019- 2020 Varsity football champions.

Samoa News Players of the Game: