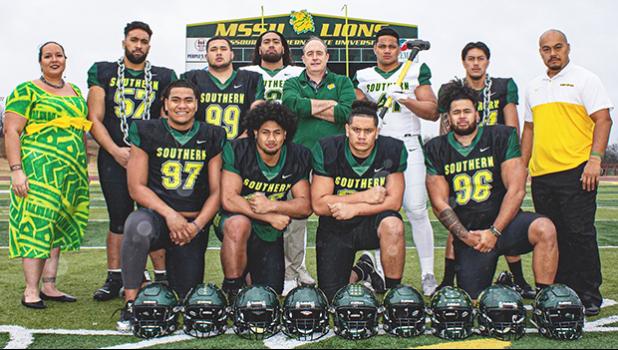 As a result, the school recently signed the largest Polynesian class - EVER
By
Samoa News staff
reporters@samoanews.com

Pago Pago, AMERICAN SAMOA — For years, Missouri Southern State University (MSSU) head coach Jeff Sims has had Polynesian players on his team’s roster. It was only a matter of time before he would come to the islands to see what gives these players their edge.

Along with MSSU Running Back Coach, Keiki Misipeka and Academic Support Specialist, Rachel Jennings - both natives of American Samoa - Coach Sims embarked on a whirlwind trip to Hawai’i and American Samoa to find talented football players.

He identified and signed one of the largest Polynesian recruiting classes ever seen for a 4-year university; but in the end, found even more by learning about the Polynesian culture and way of life.

Missouri Southern State University (MSSU) head football coach Jeff Sims wearing his ula fala during a press conference. Coach Sims took a recruiting trip to Hawaii and American Samoa in December. One of the families he visited presented the ula fala as a gift of appreciation and gratitude for helping their son attend college. [photo: courtesy]

After a stop in Hawai’i, Coach Sims and his staff made their way to American Samoa. Coach Sims didn’t stay in a hotel or rent a car during this trip. Instead, he stayed with Coach Keiki’s family, experiencing what life is really like in the islands. This allowed him to see how the Polynesian culture - whether the Aloha spirit or fa’asamoa - made the players from the islands different.

In American Samoa, Coach Sims and his staff were able to see the high schools and meet with their principals and coaches. He went to the Fagatogo Marketplace for First Friday where he enjoyed local favorites like vaisalo, suafa’i, and panikeke. He was also able to attend church at Leone’s historical EFKAS (CCCAS) Siona Chapel.

He did chores and helped make an ‘umu (traditional outdoor oven using rocks) to see how and why Samoan players are so strong with little or no access to traditional weights. He met the families of current players, and saw the trek many of them had to take to even get to school off island. Coach Sims saw firsthand the lava rocks embedded in the dirt at the only stadium in the territory - where all the football games are played - and the limited resources available to them.

Throughout the trip, Coach Sims experienced the respect and humility that is so important in Polynesian culture. He learned about the village Sa (curfew), where everyone has to stop what they’re doing and gather as a family or group for evening prayer. While living at Coconut Point, Nu’uuli, Coach Sims learned it is disrespectful to eat while walking in the village.  When he met with the family of one of his current players, Coach Sims was presented with gifts as a show of gratitude and appreciation for his help in getting their son and other athletes from around the island, to college.

One of gifts presented was an ula fala, and Coach Sims was told that it is worn by the matai (chief) of the family and represents the village.  The MSSU head coach was able to experience everyday life in the islands and it showed him that he could be tougher on the boys, as he saw the discipline instilled in these young men by everyone around them: parents, cousins, aunties, uncles, coaches, teammates, and pastors.

Inspired by his recent trip to the islands, Coach Sims has worked with Coach Keiki, Rachel Jennings, and staff to introduce the Southern Pasefika American Initiative, a program for incoming student-athletes from the islands to bridge the cultural gap to life in the continental United States.

The program began immediately upon Sims’ return to Joplin, Missouri with the 10 Polynesians currently on the team. This allowed the staff to prepare for the largest Polynesian class that Missouri Southern State University has ever signed.

Coach Sims would like to thank all of the families, governments officials, pastors, the American Samoa Department of Education, village chiefs, and most importantly, the new members of the Missouri Southern State University Football Team:

Congrats to all the new recruits. Malo Lava!