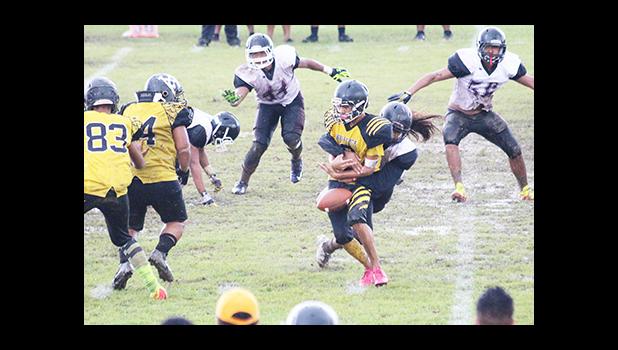 This past weekend marked the fifth week of the American Samoa High School Athletic Association (ASHSAA) Football regular season – both the Vikings and Tafuna Warriors varsity teams collected wins for their seasonal records.

Returning from a scoreless loss two weeks ago was Head Coach Kolose Ili of the Tafuna Warriors, who nearly shut out the Wildcats in their 36 - 6 victory this past Saturday morning, as the opening showdown of the scheduled triple-header action.

Dominant in their win against Nu'uuli Wildcats, the Warriors defensive unit led by Penei Stowers Pavihi were starting to see recaps of their JV's loss against Nu'uuli, in a drenched match that saw the Wildcats make the initial touchdown. However, Tafuna's Varsity Defensive Coordinator Kevin Magalei made sure that his unit never made the same mistake twice.

For the final game of the day – the main event of week five of ASHSAA Football action, the Samoana Sharks who haven't won a victory yet since the opening of the season, surely gave the Vikings a run for their money – however, it wasn't until Vikings quarterback Raemos Fano returned to lead his offense in the second quarter after a two- week absence due to injuries he encountered during their season opener against Leone that the Vikings came right.

As for Head Coach Pati Pati and his Samoana Sharks, they're still winless in the varsity division, as their offense again is going through another year of trying to get the ball rolling. For their defensive unit, Sharks DC Maselino Tautu made sure his defense understood the importance of win to their record – minor mistakes and shooting themselves in the foot led to another loss for the Sharks this past weekend.

In Junior Varsity action, the Wildcats collected their first win of the season, beating the top seed in their divisional competition, the Warriors. Tafuna was shocked to see the Wildcats break loose for the opening touchdown of the game. Jeffery Tago, leader of their defensive squad led the Wildcats in anchoring the Warriors attack.

For Samoana JV, it’s a whole different tale from their varsity division, as the Sharks collected their second victory of the season, behind the leadership of Anthony Feala, their quarterback, and their most threatening offensive weapon – wide receiver Jurgen Krusen, who scored two TD's for Samoana in their JV 26 - 8 victory over the Vikings.

The opening game of the triple header showdown last Saturday fielded in pouring rain, were showers of blessing for the Warriors from the beginning of the opening kick off – as early in the first quarter, the Warriors were able to punch in their first six points of the game after Tala Sufia hooked up with Pene Fa’avae on a 15-yard pass.

A daring fourth down conversion that opened up opportunities for them, the Warriors were up by 8 after Fetu Gaoa muscled in the 2-point conversion.

Nu’uuli answered after a long offensive drive led by their quarterback, Hans Misa with just 8:27 into the opening quarter of the game.

The second quarter opened up with Sufia showing aggressive effort in guiding his offense towards Wildcats territory, where he hooked up with Andrew To’ilolo for a lob pass towards the end zone – To’ilolo was so fast that his timing to reaching the pass was just too perfect to add six more points to the Warrior lead.

Gaoa secured a nine-point lead, ahead of Head Coach Atafua and his Wildcats. As the game progressed, Misa and the Wildcats offense struggled to score against the beastly Penei Pavihi and his solid defensive unit – on the other side of the ball, Tafuna continued to explore more offensive strategies in their comfortable lead – passing a lot more than in their past couple of games.

Gaoa and Gilboy Papali’i – two of the hardest working ball carriers for the Warrior Nation — carried Tafuna to a comfortable 24 - 6 lead into halftime.

In the second half of play, Gaoa who already led the Warriors in rushing yardage, managed to pick up more as he paved the way for Mau Ah Lin for his first touchdown of the game.

The final quarter of play really assured the Warrior Nation that they do have quite the passing game behind the arm of quarterback Sufia. Warriors first down from Nu’uuli’s 25- yard line, and Sufia aired out a long pass to Gaoa who caught that lob pass for six – but this effort was called back after a holding penalty, Tafuna’s third touchdown of the game to be called back due to live ball fouls.

Back in shotgun formation, Sufia repeated the down after their TD was declared no good – he turned around and ran the same play again, this time, firing a long bomb to Papali’i who secured the catch, and sealed the deal as he scored the final points of the game. They collected yet, another victory in ASHSAA Football Week five – Warriors won 36 - 6.

The clash between the two east side teams was a hard fought battle, their first meeting this season as ASHSAA prepares to take the regular season into round two in the upcoming weekend – but for these two teams, they showcased similar strengths as they barely moved the rock in the opening half of the game.

Almost a scoreless first half – it showed how strong and powerful these defensive powerhouses were, as Viking Bluesman Ta’ala and Leroy Fesili continued to punish Samoana’s passing game with their unstoppable pass rush defense, which led to most tackles for losses, and fumbles.

Not to mention that even the final match of the day not only had both teams drenched from the pouring weather – but had their fair share of being covered in mud, just like the first teams that fielded leading up to this main event of the day – indeed the weather had an affect on all three games.

This final was almost an offset match up – until Vikings starting quarterback Raemos Fano returned to the gridiron after a three-game absence from an arm injury that had him off the field from since the first half of their season opener against the Lions.

Since then, Fano had been on the sidelines and unsuited – until last Saturday. Supportive of Vito Kitiona, the underclassmen at the starting position for the Vikes since Fano’s injury, Raemos continued to register as the ‘back-up’ – until he finally got confirmation from Head Coach Ta’ase in the second quarter of the game, to start getting his snap counts.

Not too long into the game, and Fano puts the Vikings on the scoreboard with the first touchdown of the game, after hooking up with wide receiver John Muli’aga for Faga’itua’s first six points of the game – going into half time.

Samoana came back into the second half with a strong run game containment, a front that was showcasing a rush attack – but solely focused on their passing game, knowing that Fano is now back under center for the Vikings.

Fano continued to shine in the short yardage passing game – it opened up another opportunity for the Vikings when David Mikaele and Vimoto Mageo of Samoana mis-read an option inside give play to Leroy Fesili, who muscled his way into the end zone to secure a comfortable 12-point lead into the final quarter of play.

Just 10 minutes into the fourth, and Samoana finally starts knocking on the door with a precision air raid, as they made adjustments to what the Vikings were giving them on defense – Samoana’s Chris Tautu muscled his way into the end zone to score Samoana’s first touchdown of the game.

Not too long after that, the Sharks stealthily held onto the rock as they moved the chains downfield with the help of Aiava and Moe Faleali’i, opening up opportunities for them in the passing game – an open window that sent Ralph Taufa’asau to the end zone after connecting on the post route pass.

Samoana excited to comeback and take the lead, were heartbroken and disappointed when Fano decided that his first game back on the field ‘will not’ be a loss – he hooked up again with Muli’aga for the closing touchdown of the game, as the Vikes sailed happily back to the east side with an 18 - 14 victory.