$100 incentives are back for December Mass Vaccination drive 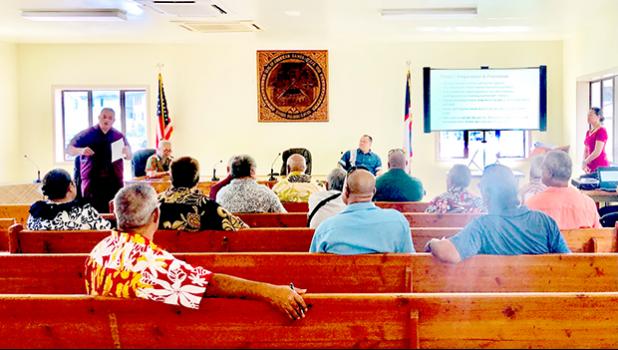 Pago Pago, AMERICAN SAMOA — ASG will once again offer a $100 incentive for first and second shots of the COVID-19 vaccine during the mass vaccination drive scheduled for first-three Wednesdays of December, according to a COVID-19 Task Force news release following Monday’s weekly task force meeting.

As reported by Samoa News on Wednesday this week, the task force changed the dates of the mass vaccination from Dec. 1 to Dec. 3rd to the new dates of Dec. 1st, Dec. 8th and Dec. 15th. Samoa News obtained the information from an ASG document, which also shows the plan to offer the $100 incentive pending discussion with the ASG Treasury, and the reasons we didn’t report this issue in Wednesday’s edition.

However, the latest task force news release makes clear that the “$100 cash incentive will be available for each person getting the shot during the territory’s Mass Vaccination program but the only ones eligible are those getting the first or second shots.”

“Those getting the booster shots and ASG employees are not eligible,” according to the task force and information in the ASG document, received by Samoa News.

The task force also confirmed in the news release that “there will be no government shutdown” and the majority of the vaccine sites will be set up at schools and church halls in areas that village mayors have identified would be easily accessible to residents.

(See separate joint press statement printed elsewhere in today’s edition on other issues covered during the meeting between the Executive and Legislative branch leaders — aside from the mass vaccination.)

During the task force meeting, Dr. Francine Amoa, who oversees the vaccination drive effort, said the COVID vaccination coverage areas show that more attention is needed in the central districts – where schools with high enrollment are also located.

She said the vaccination team is going to “hit the schools week by week” and  invite parents to the schools, have them come in and sign their child’s consent form there and be with their child when the child gets the vaccine.

“We want to tackle the schools before they break for the holidays,” said Dr. Amoa.

The Thursdays after each district’s mass vaccination have been designated as “mop up” days to be available for anyone who missed getting their shot the day before.

There will be 5 vaccination sites that will be mobile, meaning for the first few hours of the day, one vaccination team will operate in one area in the morning and then that same team will move to another area in the afternoon. Additionally, the health clinics will operate extended hours for any parent who wishes to bring their child into the clinics after hours.

The Planning Committee headed by DOH, began table top exercises and informational meetings with village mayors and Parent Teachers Associations to inform them of the plan and answer any questions.

The first table top exercise was held Tuesday this week for the central district while the PTA meetings for the central areas will be on Nov. 29th at the Tafuna DYWA and Nov. 30 at the Manumalo Gym.

The meeting with the western district village leaders will be held on Nov. 30 with the PTA meetings on Dec. 6 at Faasao Marist High School and Dec. 7 at the Leone Catholic Hall. For the eastern district, their tabletop exercise will be on Dec. 7th and the PTA information meeting is set for Dec. 13th at the DYWA building in Pago Pago and Dec. 14th at Fagaitua High School.

Dr. Amoa said the most important part of these meetings is explaining the consent form that parents or legal guardians must sign before any child gets the vaccine.

The ASG document, received by Samoa News on Tuesday, provides the specific schools and villages for each district’s vaccination sites, but efforts to obtain confirmation as to whether these are the same sites awaiting confirmation were unsuccessful.

The document shows, that many of the vaccination sites are public schools and provides operating hours. Additionally, each district is given 10 teams during the vaccination drive.

Talauega, the task force chairman is quoted in a separate news releasing saying that the mass vaccination initiative is led by DoH with the support of numerous ASG and private sector partners and asks that the Task Force assist in this important undertaking.

“We need everyone to help Director Motusa and team in the execution of an excellent plan that was put together with multiple stakeholders and the private sector,” he said.