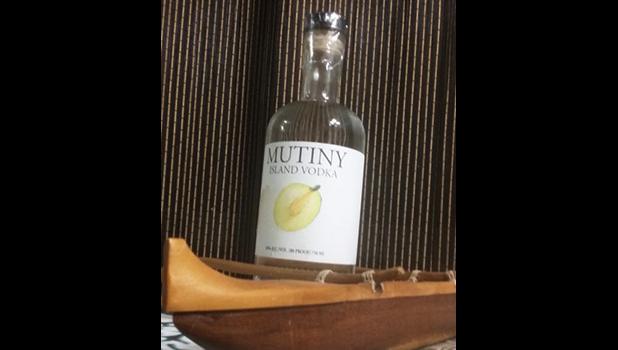 Honolulu, HAWAII — Chef Todd Manley, a former Virginia chef and now restaurateur in St. Croix in the US Virgin Islands, recently visited Hawaii and was hosted by the Pacific Business Center Program (PBCP) on his way to and from American Samoa. Chef Manley, who imports breadfruit flour from various international locations, has declared ulu flour produced by Rep. Su’a Alex Jennings of Swains Island the best he has ever worked with and wants more. A whole lot more; 250,000 lbs. by the end of the year.

Carlos Robles, Commissioner of Agriculture for the US Virgin Islands, initiated the contact with the PBCP Breadfruit Initiative team through the US Department of Interior, Office of Insular Affairs in 2015. The team visited and conducted workshops in the Virgin Islands that summer creating the bridge between the Caribbean and Pacific utilized by Chef Todd. Rep. Jennings’ dehydrator was a key component of the PBCP research and development funded by the US Department of the Interior, Office of Insular Affairs.

Chef Manley gifted the PBCP’s Director, Papalii Dr. Tusi, a breadfruit product (a vodka named Mutiny), which was distilled in Virginia Beach by Chesapeake Bay Distillery.  According to the owner of the distillery, Chris Richeson, the vodka received rave reviews during sample testing. Both understood the potential of the high quality and exotic appeal of the spirit to penetrate the US market, which knows little or nothing about breadfruit. A priority of PBCP is expanding the awareness of breadfruit not only as being gluten-free, but also having a low glycemic index. This makes it a compelling natural food solution to fight diabetes and obesity, the number one cause of death in the Pacific and regions of the world dependent on imported processed foods. Slowing down and stopping childhood diabetes is a passion of Papalii Dr. Tusi.

The Breadfruit Vodka test rave has already generated an astonishing demand for 70,000 bottles and only awaits approval for labeling before being bottled and sold.  The spiraling interest in breadfruit vodka will enable other breadfruit products to gain market access to the US consumer through the restaurant network Chef Todd is actively engaged with along the eastern seaboard and U.S. Gulf States.  Breadfruit products affect health, diet, sustainability, food security, disaster preparedness and its by products include an organic pesticide more potent then Deet, latex products and termite resistant wood, among others.

Commercialization of ulu on an industrial scale for export has not occurred anywhere in the world, yet. With collaborative opportunities to build upon between the U.S. Virgin Islands and American Samoa, which can expand to the greater Caribbean and Pacific, regional to global industries could be only a matter of time and investment.

Essential to any industry development and commercialization process in the islands is a holistic waste management system. A system that can be retrofitted into a freight container for deployment by sea, land and air to remote islands, isolated coastal communities and rural areas. Such a system is especially effective for disaster recovery situations where centralized systems have been destroyed. Towards that end, PBCP is also promoting the use of an award-winning system of waste management invented by UH graduate Michael Lurvey, as part of an integrated system with Rep. Jennings breadfruit dehydrator (also in a retrofitted freight container).

Rep. Jennings took up the challenge of producing marketable, quality breadfruit flour in 2015. Bank of Hawaii recognized the potential of his work and initiated support with its local community development program that supplemented his personal efforts in his progress towards the drying challenge and solution. The UH Breadfruit Initiative engaged both the food engineering and the milling and flour making expertise of Kansas State University (KSU) with product development from both KSU and the UH College of Tropical Agriculture & Human Resources.  Such institutional based research and development expertise provided technical assistance and support for Jennings, whose creative genius and persistence has successfully produced a dehydration technology that consistently produces quality breadfruit flour.

“What Representative Jennings has done is demonstrate how investing in local capacity has enabled a US Territory to utilize a local agricultural resource, weave local traditional wisdom, knowledge and expertise with modern science and technology, and produce products through processes from ground to table that create local employment opportunities for a sustainable community-based economy where everyone benefits,” commented Dr. Tusi Avegalio. “Even more compelling is engaging in collaborative efforts with Chef Todd in the Caribbean who, likewise, is of the same mind set. It’s those types of synergies and boldness to move forward in spite of naysayers, that change the world.”

Dr. Diane Ragone—Distinguished Professor and Titular Head of the Pacific Regional Breadfruit Initiative and the Director of the Breadfruit Institute (BI) of the National Tropical Botanical Garden in Kauai. Her vision to promote and share the gifts of the breadfruit to feed the hungry and raise the common good for humanity is the driving force behind global initiatives that are inspired by that purpose.

Dr. Sela Panapasa—Research Scientist at the University of Michigan’s Institute for Social Research. Her work includes research on family support and intergenerational exchanges, population dynamics, racial/ethnic disparities and population-based survey research on Pacific Peoples and Health. Dr. Panapasa is from the island of Rotuma, Fiji,

Dr.  Jeff Gwirtz—International milling and flour expert and consultant for cost effective milling and grain processing with extensive knowledge of the industry and technical aspects of flour making. His company, JAG Services, Inc., currently has developed breadfruit milling and flour-making expertise with breadfruit from active fieldwork in Hawaii and the Samoa’s. Dr. Gwirtz is also an adjunct professor for Kansas State University Department of Grain Science and Industry.