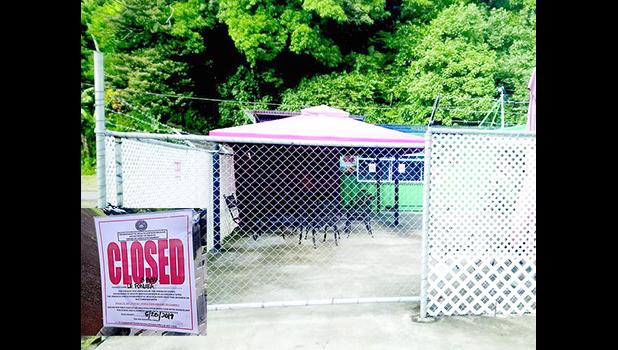 Pago Pago, AMERICAN SAMOA — Last Thursday, government employees who work at the A.P. Lutali Executive Office Building (EOB) in Utulei had to buy their morning coffee and lunch plates elsewhere, after Department of Health (DOH) inspectors closed off the Le Fonuea, a fast food establishment located at the back of the EOB parking lot.

According to the DOH notices posted all over the site, the American Samoa Environmental Health Services Division inspected the facility which was found to be non compliant with orders and "did not meet sanitation practices upon inspection with significant violations and is deemed closed until further notice."

As is the usual practice, DOH inspectors conduct random site visits at local establishments that sell food and drinks. When DOH shuts down a business, the owners are usually given a set time frame of when they need to come into compliance, and they are given a check list of things that need to be addressed. The issues usually have to do with cleanliness and things that pose a health risk to the community.

It is unclear when the routine follow-up inspection for Le Fonuea will be carried out. The re-opening of the establishment is dependent on the results of that follow-up visit.

Le Fonuea is owned by Dept. of Human Resources director Eseneiaso Liu and her husband Siakisone. The restaurant — which opened earlier this year in January — is operated out of a container and another small structure only a few feet away from the EOB back entrance.

Le Fonuea offers fast food options. People have the choice of ordering 'take out' or enjoying their meal under one of the umbrella-covered tables.

When it first opened, the establishment was criticized by local business owners who questioned how a restaurant was permitted to open up on government property, and if there was ever a Request For Proposal (RFP).

Others also wondered the logic behind opening a restaurant so close to the EOB when the rat infestation problem continues to grow and has resulted in EOB employees being told that nobody is allowed to eat inside the building — ever.

In addition to their EOB restaurant, Le Fonuea is also the distributor of a 'vai fala' (a concoction of milk and pineapple juice) that is packaged, labeled, and sold locally in plastic bottles.