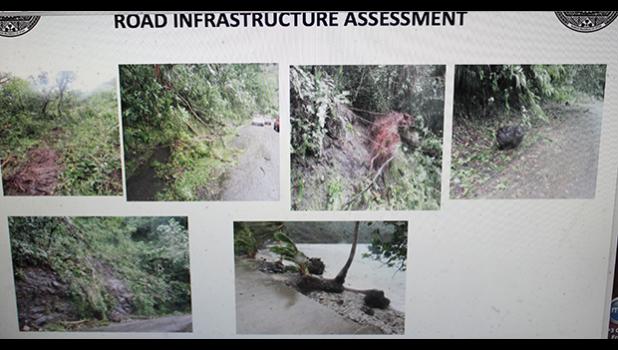 Pago Pago, AMERICAN SAMOA — “We need to help our people with what they need,” declared Gov. Lolo Matalasi Moliga during a weather update briefing of first responders and cabinet members on Wednesday, saying that this is a priority after damaging winds and heavy rain from a lingering monsoon trough bombarded American Samoa since the weekend — this, before Thursday’s tropical depression and today’s (Friday) Tropical Storm Warning.

“Very important now is for the government's response to focus on the most serious families” and their needs, he said, adding that certain ASG entities such as American Samoa Power Authority, American Samoa TeleCommunications Authority and Public Works deal with the US Federal Emergency Management Agency (FEMA) on addressing infrastructure issues.

He says ASG can carry out clean up of debris and other issues and for DPW to bring in private contractors if needed at this point, to address current pressing matters, without having to seek FEMA help, since the storm is “not a major impact” on the territory.

“So if you are counting on [an emergency] declaration,” like the one issued in February 2018 due to Tropical Storm Gita, “that is not going to happen,” the governor said.

“Let’s focus on what we can do now,” he said and emphasized that “only on major issues, such as infrastructure, then we can address that with FEMA.” Lolo thanked all ASG officials, its partners and first-responders for their continued hard work.

Presentation made by the government states that four assessment teams — whose members included DPW and TEMCO — were dispatched on Tuesday to look at damages caused by the storm. The teams used the FEMA formula in conducting their assessments.

The initial assessment found six family structures for 17 households. The “most serious” case was a family home in Malaloa, and their property destroyed. The home housed 14-family members including a 63-year old. The family sought shelter with a neighbor as their home was no longer safe, with the roof severely damaged and contents inside the home were damaged or destroyed.

The DHSS report, presented at the briefing also shows that another family whose home was destroyed, is in Pago Pago. And this is a family of 8 and their unmet needs include food and money to pay expenses.

A second family in Pago Pago suffered damage to the roof of their home and an assessment was being carried out.

ASG worked with the local Red Cross to assist families for their immediately needs.

DHSS also assessed the unmet needs of those who stayed at emergency shelters — which were church halls and public schools. The unmet needs reported are: food, tarps for leaking roofs/ covering windows and standing coolers for water. Those who sought emergency shelters did so because they don’t have other options. DHSS again worked with the local Red Cross to address emergency needs for those staying at shelters.

It was also revealed during the briefing by other ASG agencies that some affected families opted to stay with neighbors or relatives and didn’t go to the emergency shelters.

As of Wednesday night, no one was staying at public schools while others were moving out of the private shelters.

As for an assessment report from Manu’a, staff of ASG entities with offices in the island group are providing information, updates and photos — which are then shared during the briefings. An assessment will be carried out soon with a team from Tutuila.During weather update briefings ASPA and ASTCA asked for the public’s patience as they work as fast as they can to restore service, weather permitting and safety of crew.