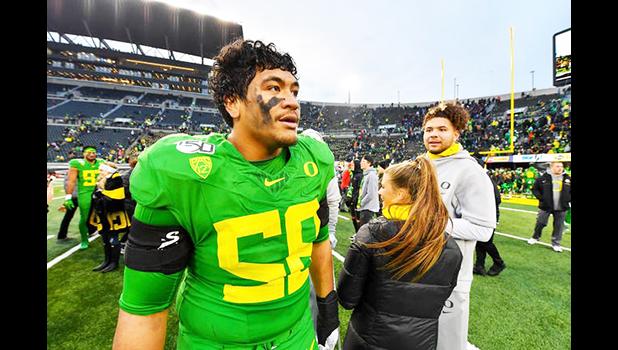 DETROIT (AP) — The Detroit Lions opened the NFL draft by bolstering a strength and closed it by addressing some of their many weaknesses on both sides of the ball.

General manager Brad Holmes seemed to make sensible selections, starting with Oregon offensive tackle Penei Sewell at No. 7 overall, in his first draft with the franchise.

Holmes and first-year coach Dan Campbell are inheriting a defense that ranked among the worst in NFL history last season. Aiming to fix some of the unit’s shortcomings, the Lions used four picks on that side of the ball in the second, third, fourth rounds.

“I think we really gave a boost to our defense,” Holmes said.

Holmes could have generated more excitement by taking Alabama receiver DeVonta Smith or Ohio State quarterback Justin Fields, talented players who were taken No. 10 and 11 overall by Philadelphia and Chicago.

The franchise, though, needs substance over style with every move it makes.

Holmes chose Sewell as a key building block for the turnaround he is attempting to oversee, evaluating him as one of the most talented and toughest players available at any position.

“Penei is pretty flashy himself,” Holmes said. “Obviously, it’s termed often as not as sexy when you go with a big lineman. Sometimes, they say it’s safe and sound. But I think it will be a very attractive pick when he’s rolling with our offensive line during the season and is making an impact.”

Sewell was born on October 9, 2000 in Malaeimi. He would begin playing American football alongside his three brothers as a child after his father Gabriel became a coach.

Seeing the potential for his children to make it to NFL, Gabriel moved his family to St. George, Utah in 2012. There, Sewell attended and played football at Desert Hills High School. As a senior in 2018, he received invites and played in the US Army All-American and Polynesian Bowls before committing to the University of Oregon to play college football for the Oregon Ducks.

He is the son of Gabriel and Arlene Sewell and has three brothers: Gabriel, Nephi, and Noah. Gabriel is a linebacker for the Nevada Wolfpack, Nephi is a defensive back for the Utah Utes and Noah is a linebacker for Oregon. Sewell is the nephew of former NFL players Isaac Sopoaga and Richard Brown.